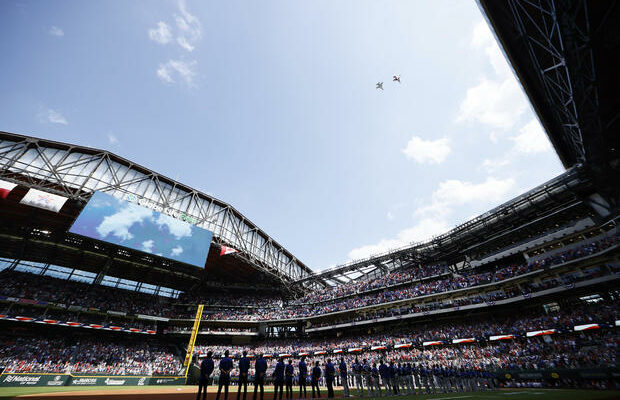 F-16 fighter jets perform a flyover during the National Anthem before the Texas Rangers take on the Toronto Blue Jays on Opening Day at Globe Life Field on Monday. / Getty Images
The Texas Rangers hosted nearly 40,000 fans at Globe Life Park in Arlington on Monday, making it one of the first full-capacity sporting events in the U.S. since the beginning of the coronavirus pandemic more than a year ago.

Monday’s 6-2 loss to the Toronto Blue Jays was the Rangers’ first home game, which had a sellout crowd of 38,238. The retractable roof was open on a 75-degree day and face coverings were still required for the game, except when fans were actively eating or drinking.

Rangers manager Chris Woodward said Monday having the fans in the stands made for an “electric” atmosphere, even though they didn’t win.

“I was hoping we’d see how loud our stadium got if we gave them something to cheer about, but unfortunately we didn’t do that,” he said.

The team gained national attention after they made all tickets available for the home opener last month, about a week after Texas Governor Greg Abbot announced he was rescinding the state’s mask mandate. President Joe Biden told ESPN on Thursday he thought the decision was a “mistake.”

“Well, that’s a decision they made. I think it’s a mistake,” Biden said. “They should listen to Dr. Fauci, the scientists and the experts. But I think it’s not responsible.”

Before Monday’s game, Abbott said he wouldn’t throw the first pitch at the home opener or participate in Major League Baseball at all after the league pulled its All-Star Game out of Atlanta. The MLB moved the game to Denver in response to sweeping changes to Georgia’s voting laws,

Monday was also the first time Rangers fans could attend a regular season game at their new stadium. Globe Life Park served as a neutral site for 2020 National Championship Series and World Series, and was the only baseball stadium that hosted fans last year.

The majority of teams are limiting fan attendance to about 25 percent capacity, CBS Sports reported. The Houston Astros aren’t opening up Minute Maid Park at full capacity, but will be allowing 50 percent capacity to attend games throughout the month of April.