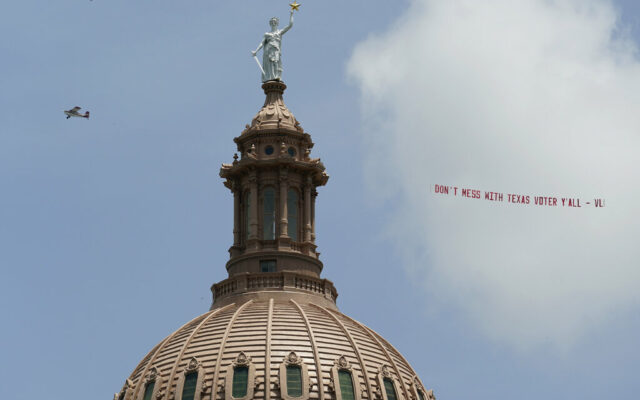 SAN ANTONIO (KTSA News) — Texas House Republicans said this afternoon some Democrats have returned to the state, but more need to come back before voting can resume.

At least 51 Democrats left Texas last Monday to break quorum and protest voting and election security legislation at the forefront of the special legislative session that began July 8.

One of the returning Democrats is San Antonio Rep. Philip Cortez.

Two-third of Texas House members need to be present in order to hold a quorum that would allow for a vote.

“We’re meeting with our retired teachers, foster care providers and more over the past few days and coming into the future,” Murphy said. “Our ability to act on these issues though, unfortunately, is somewhat limited due to the absence of our Democrat colleagues.”

Democrats have responded to calls to return by their Republican colleagues by stating they were ready to vote on 13th check legislation for retired teachers for the last five sessions. Republicans said they couldn’t pass the legislation during the regular session over budget constraints.

Rep. Greg Bonnen said the state comptroller provides the legislature with an updated biannual revenue estimate based on the state’s economy each time a regular or special session is called.

“Our state’s economy is very robust and it has recovered and shown tremendous resiliency in the aftermath of the pandemic in the subsequent recession,” Bonnen said. “And as a result, we have approximately $7.8 billion in available revenue.”

Bonnen stated those funds are “almost entirely additional to what we had available to us going through the regular session.” The additional action items like the 13th check, bail reform and election security were not possible without this additional funding, Bonnen said.

Bonnen said the more than $7 billion available now is the result of continued positive economic performance and “was not anticipated to be available to us just literally a few months ago.”

The additional funding identified by the comptroller is separate from the federal funding Texas will receive through the American Rescue Plan Act of 2021, Bonnen said.

Murphy said the “federal dollars are still yet to come” and that funding may become part of special session legislation, but did not elaborate.

Rep. James White, Chairman of the House Committee on Homeland Security & Public Safety, said there is “nothing peculiar” about current election legislation under consideration by the state legislature noting some of the provisions are compromises or ideas by Democrats.

“I just don’t know what else there is to negotiate here,” White said. “I’m sure there [are negotiations], but as the chairman said we need you here to chat about that.”

Bonnen said the goal of the election legislation is to make it easy to vote and hard to cheat.

“There’s been far too much rhetoric from our Democratic colleagues and a very scarce amount of discussion about the substance of what is actually in the legislation,” Bonnen said. ”

Murphy said conversations with Democratic colleagues in Washington D.C. are occurring in a variety of ways: officially between high level officials, unofficially between friends across the aisle and by staff members who are reportedly running out of paychecks.

“We really can’t have healthy, meaningful dialogue unless our colleagues choose to participate in the process and that occurs here in Austin,” Bonnen said. “So they need to come home and honor their commitment to their constituents and to the people of the State of Texas.”

Texas Democrats are meeting Wednesday afternoon with Crystal Mason, the Tarrant County woman who faced a five-year prison sentence for illegally casting a vote. Mason was on supervised release for federal tax fraud at the time she cast a provisional ballot in the 2016 election on the advice of a poll worker. She has maintained she did not know she was ineligible to vote under Texas law and said she would not have knowingly risked her freedom.