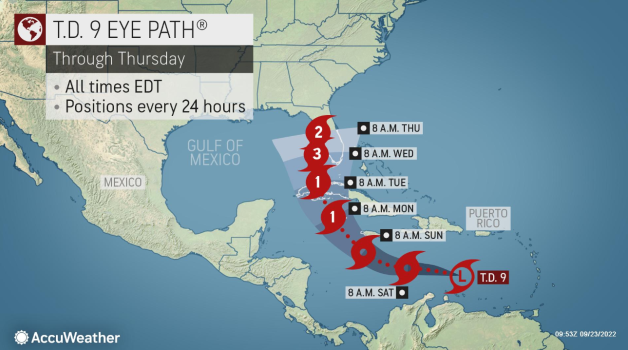 SAN ANTONIO (KTSA News) — Weather forecasters are now watching Tropical Depression Nine, which formed Friday and is expected to become a hurricane as early as Sunday.

Texas, along with the central Gulf Coast should be spared as current models show the soon-to-be hurricane hitting Florida and the Atlantic Coast as early as next Tuesday night.

“Because of very warm waters and a forecast minimal amount of disruptive winds, there is the potential for the system to undergo rapid strengthening anytime from this weekend to midweek,” AccuWeather Lead Long-Range Meteorologist Paul Pastelok said.

Predictions right now are comparing the development and future track of TD Nine to Hurricane Charley, which hit the eastern Gulf Coast and Florida in August 2004.

TD Nine was tracking west-northwest with a forward speed of 14 mph Friday. Maximum sustained winds were 35 mph, and AccuWeather forecasters said the storm was battling significant wind shear, which will limit its development in the short term.

However, the AccuWeather forecast team thinks the system could undergo a rapid intensification in the days ahead as it churns northward and the wind shear subsides.