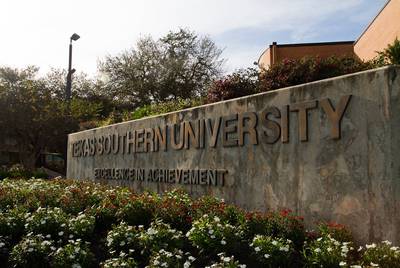 The president of one of the country’s largest historically black colleges, Texas Southern University, in Houston, was placed on paid administrative leave Friday by university regents.

The board provided no explanation for the decision but said in a statement they were “committed to ensuring all activities at the university are conducted in an ethical and transparent manner in accordance with the university’s mission, vision and values.”

Texas Southern “will have no further comment at this time,” the statement says. The surprise announcement comes shortly after an internal review found improprieties in Texas Southern’s admissions process.

President Austin Lane could not immediately be reached for comment, but he told Houston television station KPRC 2 that he was “caught off guard” by the decision and expected “to be reinstated immediately or paid out for the remainder of my contract for breach of contract.”

“I haven’t done anything and haven’t been informed of being placed on administrative leave by the board,” he told KPRC 2, which reported him saying he wasn’t invited to meetings with the board Friday nor informed about any violations. Previously the executive vice chancellor of Lone Star College, and president of Lone Star College-Montgomery, Lane became the 12th president of Texas Southern in 2016.

The recommendation to place Lane on immediate administrative leave as an “additional audit committee and external investigation continues” was read aloud and later approved at the board’s meeting Friday. But one regent, Derrick Mitchell, defended Lane, saying there were some on the board “who have been out to undermine” him from the start.

“I think this has been, that the process was flawed,” Mitchell said during the meeting. “And I think that what we as a board may be doing is an injustice.”

Chief Financial Officer Kenneth Huewitt will be interim president of Texas Southern, which was established by the state Legislature in 1947 and has about 9,700 students, 80% of them African American.

The news comes about two months after an internal investigation found “certain improprieties related” to Texas Southern’s admissions process, leading the board to launch a comprehensive review of the university’s admissions, extending to enrollment, financial aid and scholarship protocols at each of its colleges. The review is being led by independent auditors, attorneys and experts.

A statement announcing the review in November said the “person involved with these improprieties” was no longer employed at Texas Southern and that information had been turned over to local authorities. “The University will have no further comment until the investigative process is complete,” it added.

In 2006, another former Texas Southern president was fired and nearly faced prison over allegations that she spent some $500,000 in university funds on personal items, like furniture. The trial of former President Priscilla Slade ended with a deadlocked jury and she agreed to a plea deal in 2008.