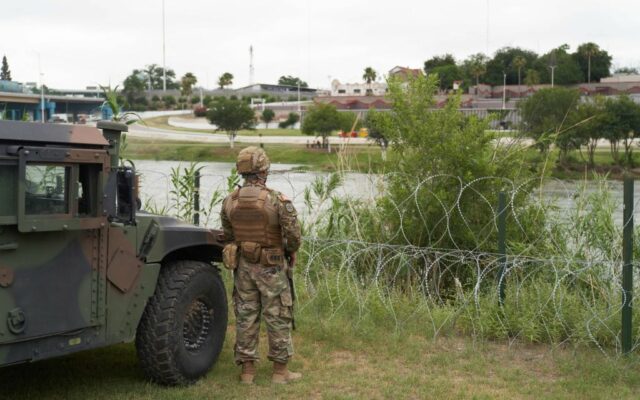 A National Guard soldier stands by as Texas Governor Greg Abbott tours the US-Mexico border at the Rio Grande River in Eagle Pass, Texas, on May 23, 2022. - A Louisiana federal judge blocked the Biden administration on Friday from ending Title 42, a pandemic-related border restriction that allows for the immediate expulsion of asylum-seekers and other migrants. (Photo by allison dinner / AFP) (Photo by ALLISON DINNER/AFP via Getty Images)

Gov. Greg Abbott announced Wednesday that Texas will add new checkpoints for trucks entering the state from Mexico after after over 50 migrants died in connection with an abandoned tractor-trailer found in San Antonio.

The Department of Public Safety “will create and implement a checkpoint strategy beginning immediately where they will begin targeting trucks like the one that was used where these people perished,” Abbott said during a news conference in Eagle Pass.

DPS directer Steve McCraw suggested the checkpoints would be along “smuggling corridors” that connect ports of entry from Mexico to major Texas cities like San Antonio and Houston. Abbott declined to say where exactly the additional checkpoints will be, saying the state wanted to “surprise the cartels and the smugglers.”

Additional details were unclear, including how different the new checkpoints would be from the expanded commercial vehicle inspections that Abbott ordered in April, snarling trade for days along the border and costing the state $4.2 billion by one estimate. He eventually ended that policy as Mexican governors made commitments to better secure their side of the border.

An Abbott spokesperson referred a request for comment to DPS, which did not immediately respond.

McCraw said the agency would be taking some of its troopers inspecting vehicles at the international bridges “and mov[ing] them further out” for the new checkpoints. DPS is also bringing in “commercial vehicle enforcement strike teams” from outside the border region, he said.

The San Antonio truck was discovered Monday evening on San Antonio’s Southwest Side. A Mexican official says there were 67 inside the trailer and 53 are dead.

Three people were taken into custody after the discovery.

The owners of a South Texas trucking company have said they believe the truck found in San Antonio was “cloned” to look like one of theirs but that it is not. McCraw said DPS will be focusing on such trucks with the new checkpoints.

U.S. Rep. Henry Cuellar, D-Laredo, told the Associated Press on Wednesday that the truck found in San Antonio had made it through a Border Patrol checkpoint along Interstate 35 northeast of Laredo.

After authorities found the truck Monday in San Antonio, Abbott quickly blamed President Joe Biden and his border policies. Abbott continued to blast Biden on Wednesday, claiming that the truck was “not inspected” at the Border Patrol checkpoint “because Border Patrol does not have the resources to be able to inspect all of the trucks.”

Join us at The Texas Tribune Festival, happening Sept. 22-24 in downtown Austin, and hear from 300+ speakers shaping the future of Texas including Joe Straus, Jen Psaki, Joaquin Castro, Mayra Flores and many others. See all speakers announced to date and buy tickets.

This article originally appeared in The Texas Tribune at https://www.texastribune.org/2022/06/29/greg-abbott-texas-migrant-deaths-checkpoints/.