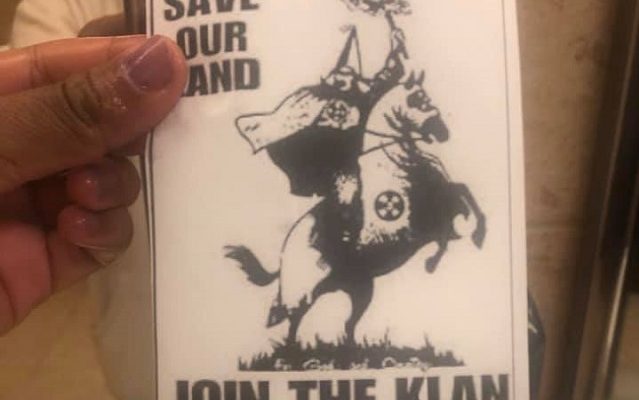 SAN ANTONIO (KTSA NEWS) – The FBI is helping campus police investigate KKK recruiting flyers found at a high school in the Southeast Side.

Two leaflets depicting a robed Ku Klux Klansman with the message “Save our Land” and “Join the Klan” were found Tuesday at East Central High School.

“There’s no room at all for that sort of language or anything like that in our school district,” spokesman Brandon Oliver told KTSA News.”We pride ourselves in our core beliefs of being inclusive with a diverse student body, faculty and staff.”

He says a student found one of the flyers wedged between a soap dispenser and a bathroom wall Tuesday. Oliver says the student notified his mother, but failed to tell administrators at the school. They found out after a photo of the flyer was posted on social media,  and the high school principal has reached out to the boy’s mother.

Another KKK leaflet was found in a bathroom by a staff member.

“Our East Central Police Department is working with federal, state and local agencies to try to find this individual,” Oliver said. “Whether the flyers were a prank or intentional, this is very concerning to ECISD and we will punish the individual accordingly when caught.”