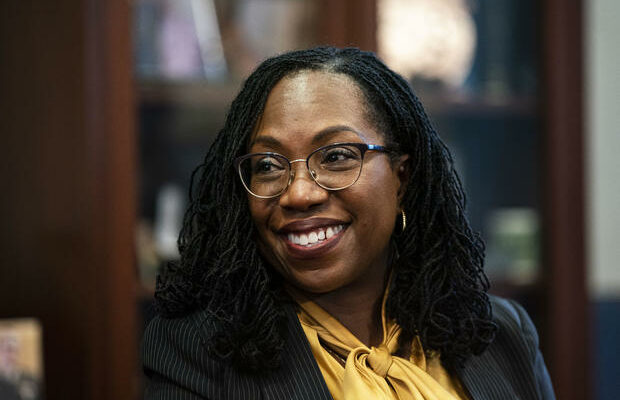 Washington — President Biden’s announcement Friday of Judge Ketanji Brown Jackson as his historic nominee to the Supreme Court set in motion a confirmation battle in the Senate, where GOP senators have vowed to closely examine Jackson’s record before determining whether to support her nomination.

While Jackson does not need backing from Republicans to be confirmed to the nation’s highest court if all Democrats support her — Democrats hold 50 seats in the Senate and Vice President Kamala Harris breaks tie votes — Senate Judiciary Committee Chairman Dick Durbin has said he wants the confirmation vote to be bipartisan.

Some GOP senators, like Mitt Romney of Utah, have said they are open to voting to confirm Jackson, but Minority Leader Mitch McConnell has been critical of her. Examining her nearly nine years on the federal bench, the Republican Senate leader said in a statement that Jackson has published two opinions in her nine months on the U.S. Court of Appeals for the District of Columbia Circuit, and one of her decisions from the district court was reversed by a unanimous three-judge panel on the D.C. Circuit.

McConnell also claimed Jackson was the “favored choice of far-left dark-money groups” who have advocated for adding seats to the Supreme Court and questioned its legitimacy.

Jackson began one-on-one meetings with senators Wednesday, and her confirmation hearings, which will span four days, begin March 21. During the two days of questioning from Judiciary Committee members, here are some issues you can expect Republicans to focus on.

Across her eight years on the district court, Jackson authored 578 decisions and, as McConnell said, issued two opinions in the nine months she has been on the D.C. Circuit, according to her questionnaire submitted to the Senate Judiciary Committee. She presided over 12 trials as a district court judge and recused herself from 12 cases.

Ten of her decisions from the U.S. district court were reversed by the D.C. Circuit, either in whole or in part, she wrote in her questionnaire.

One such decision involves a 2018 challenge brought by federal employee unions to three executive orders issued by then-President Donald Trump over their collective bargaining rights. Jackson ruled for the unions, finding the court had the power to hear their claims and that most of the provisions in the executive orders conflicted with federal workers’ collective bargaining rights under federal labor law.

A unanimous panel of the D.C. Circuit reversed Jackson’s decision, ruling the unions must pursue their claims through administrative processes, followed by the courts of appeals.

In another legal fight heard by Jackson while she served on the district court, immigrant-rights groups sued the Department of Homeland Security over a rule expanding expedited removal. Jackson granted a request from the organizations to block the Trump administration from enforcing the rule. But a three-judge panel on the D.C. Circuit reversed Jackson’s grant of the preliminary injunction.

Across her tenure on the federal judiciary, Jackson does not appear to have issued decisions on the politically charged issues of abortion, the Second Amendment or religious liberty, and the D.C. Circuit hears many cases involving administrative law.

Still, Jackson’s record from the district court includes the 2019 high-profile dispute between the House Judiciary Committee and former White House counsel Don McGahn, in which she said McGahn had to comply with a congressional subpoena for testimony.

“Presidents are not kings. This means that they do not have subjects, bound by loyalty or blood, whose destiny they are entitled to control,” she wrote. “Rather, in this land of liberty, it is indisputable that employees of the White House work for the people of the United States, and that they take an oath to protect and defend the Constitution of the United States.”

Several Republicans questioned Jackson — in person and in writing — about her decision in that case during her confirmation process for her seat on the D.C. Circuit last year.

Grassley, in particular, posed a series of queries to Jackson referencing her opinion, including whether former President Barack Obama was a “king” and whether the Justice Department claimed “monarchical powers for the president” in McGahn’s case.

GOP Senator Thom Tillis of North Carolina, meanwhile, questioned Jackson about her characterization of her opinion in the McGahn case as “just another opinion” and asked her to explain why, at 118 pages, it fit that description.

Democrats lauding Jackson’s nomination to the Supreme Court have highlighted her professional experience, which includes stints in private practice, with the U.S. Sentencing Commission and as an assistant federal public defender. If confirmed by the Senate, she will be the sole sitting justice to have served as a public defender and the first since Justice Thurgood Marshall to have represented criminal defendants.

While Jackson’s supporters view that experience as a boon, Republicans on the Judiciary Committee are likely to focus on clients she represented while working for two years in the Office of the Federal Public Defender in Washington.

In written questions submitted to Jackson last year, GOP Senator Ben Sasse of Nebraska asked why, as an assistant federal public defender, she worked on behalf of Khi Ali Gul, who was captured by Afghan forces in 2002, designated an enemy combatant and sent to Guantanamo Bay, Cuba. He was released and transferred to Afghan authorities in 2014. Sasse also asked whether Jackson considered resigning her position if she did not have a choice as to whether to work on the detainee’s behalf.

Jackson told Sasse she and other assistant federal public defenders represented Guantanamo detainees whose legal claims for relief were being litigated in federal courts in Washington.

Jackson added that during this time, her brother was in the U.S. Army and deployed to Iraq, and wrote she was “keenly and personally mindful of the tragic and deplorable circumstances that gave rise to the U.S. government’s apprehension and detention of the persons who were secured at Guantanamo Bay.”

She noted that under ethics rules, “an attorney has a duty to represent her clients zealously, which includes refraining from contradicting her client’s legal arguments and/or undermining her client’s interests by publicly declaring the lawyer’s own personal disagreement with the legal position or alleged behavior.”

Sasse also questioned Jackson about her work on friend-of-the-court briefs in support of Guantanamo Bay detainees whose cases were before the Supreme Court and whether that work “would result in more terrorists being released back into the fight against the United States?”

Jackson replied that she worked in the Supreme Court and Appellate Group of a private law firm at the time those cases were before the Supreme Court and co-authored amicus briefs for clients in two of the cases — one on behalf of former federal judges and the other on behalf of the Cato Institute, the Constitution Project and Rutherford Institute.

“I believe that I was assigned to work on these amicus briefs because of the knowledge of the military tribunal processes that I had accumulated from my prior work as an assistant federal public defender,” she told Sasse.

Grassley also focused on a friend-of-the-court brief Jackson helped author on behalf of pro-abortion rights groups in a 2001 case before the 1st U.S. Circuit Court of Appeals involving a Massachusetts law creating a six-foot floating buffer zone around abortion clinics.

“I was assigned to work on this amicus brief related to a matter that was pending in the First Circuit, among other projects,” she wrote in response to a submitted question from Grassley about her participation, saying that the brief was filed when she was an associate at a Boston-based law firm and in her last year practicing law.

As a U.S. district judge, Jackson sentenced the so-called “Pizzagate” conspiracy theorist, Edgar Maddison Welch, to four years in prison. Welch acknowledged he entered the Comet Ping Pong restaurant in Washington with an AR-15 and revolver in December 2016 to investigate a conspiracy theory. He pleaded guilty to violations of federal law and D.C. code.

As a federal appeals court judge, Jackson was on the three-judge panel that rejected Trump’s attempt to keep the National Archives and Records Administration from turning over his White House records to the House select committee investigating the January 6 assault on the U.S. Capitol.

Trump sought intervention by the Supreme Court in the manner, though the justices declined to block the Archives from releasing the documents to the January 6 committee.