The Latest: Biden to keep troops in Afghanistan until US evacuees out 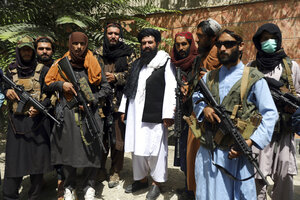 KABUL, Afghanistan (AP) — WASHINGTON — President Joe Biden says he’s committed to keeping U.S. troops in Afghanistan until every American is evacuated, even if that means maintaining a military presence there beyond his Aug. 31 deadline for withdrawal.

In an interview with ABC News’ George Stephanopoulos on Wednesday, Biden said that the U.S. will do “everything in our power” to get Americans and U.S. allies in the nation out before the deadline. Pressed repeatedly on how the administration would help Americans left in the nation after Aug. 31, Biden finally affirmed, “if there’s American citizens left, we’re gonna stay till we get them all out.”

Up to 15,000 Americans remain in Afghanistan after the Taliban took full control of the nation. The Biden administration has received criticism for the scenes of violence and disorder in recent days as thousands attempted to flee while the Taliban advanced.

But during the same interview, Biden suggested there wasn’t anything the administration could’ve done to avoid such chaos. “The idea that somehow, there’s a way to have gotten out without chaos ensuing, I don’t know how that happens,” he said.

MORE ON THE CRISIS IN AFGHANISTAN:

— Taliban allowing ‘safe passage’ from Kabul in US airlift

— In Taliban’s 7-day march to power, a stunning string of wins

— US agencies scrub websites to protect Afghans left behind

HERE’S WHAT ELSE IS HAPPENING:

WASHINGTON — The Biden administration has suspended all arms sales to the government of Afghanistan following the Taliban takeover of the country.

In a notice to defense contractors posted Wednesday, the State Department’s Political/Military Affairs Bureau said pending or undelivered arms transfers to Afghanistan had been put under review.

“In light of rapidly evolving circumstances in Afghanistan, the Directorate of Defense Sales Controls is reviewing all pending and issued export licenses and other approvals to determine their suitability in furthering world peace, national security and the foreign policy of the United States,” it said.

The notice said it would issue updates for defense equipment exporters in the coming days.

WASHINGTON — The International Monetary Fund says that the new Taliban government in Afghanistan will not at the current time be allowed to access loans or other resources from the 190-nation lending organization.

In a statement Wednesday, the IMF said it would be guided by the views of the international community.

The statement said, “There is currently a lack of clarity within the international community regarding recognition of a government in Afghanistan, as a consequence of which the country cannot access SDRs or other IMF resources.”

SDRs are special drawing rights which serve as a reserve that IMF member countries can tap into to meet payment obligations.