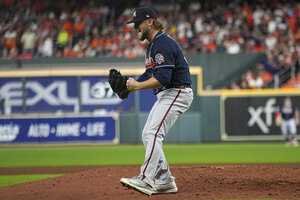 HOUSTON (AP) — Jorge Soler became the first player to begin a World Series with a home run and the Atlanta Braves beat the Houston Astros 6-2 in Tuesday night’s opener despite the loss of pitcher Charlie Morton to a broken leg.

Boosted by a strong bullpen effort, a two-run homer by Adam Duvall and a late sacrifice fly from Freddie Freeman, the Braves coasted in their first Series appearance since Chipper Jones and their Big Three aces ascended in 1999.

Jose Altuve, Carlos Correa and the Astros mostly looked lost at the plate. This was their third World Series in five seasons — and first since their sign-stealing scheme was revealed.

Before the game, Major League Baseball Commissioner Rob Manfred said there were plenty of sleuths monitoring the dugouts, clubhouse and stands to guard against any possible shenanigans.

Morton was hurt on Yuli Gurriel’s comebacker leading off the second inning and left after striking out Altuve leading off the third. A.J. Minter got the win with 2 2/3 innings of one-run relief, throwing a career-high 43 pitches.