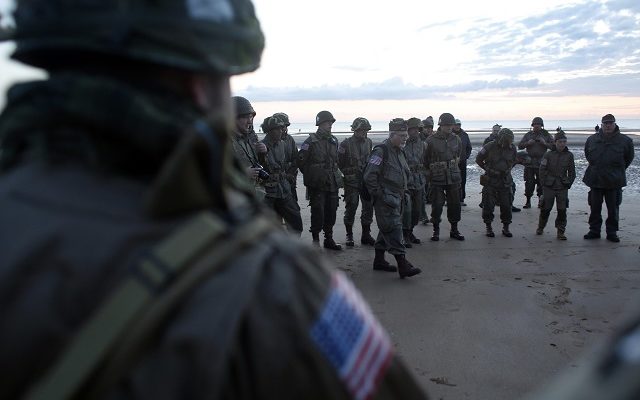 OMAHA BEACH, France (AP) — The Latest on the 75th anniversary of D-Day (all times local):

Many people commemorating D-Day’s 75th anniversary worry that the sacrifices of the pivotal World War II invasion are being forgotten.

And that’s why they gathered at dawn Thursday all along Normandy’s landing beaches, holding flags, staring into the waves or thinking of the first waves of soldiers falling in the hail of German fire on June 6, 1944.

Richard Clapp, a 44-year-old former U.S. paratrooper and computer store owner from Julian, North Carolina, says: “If you forget history, it is doomed to repeat itself.”

Mike Connor, a 43-year-old Ford truck maker from Louisville, Kentucky, carried a black-and-white photo in his shoulder pocket of his great-uncle, John Connor, who fought in the Battle of the Bulge.

Arnold Omitt, a 52-year-old of Mesa, Arizona, described “a sense of appreciation for a whole generation of people who came here and liberated the continent from Nazi tyranny.”

D-Day veterans and other people are marking exactly 75 years since the invasion of Normandy that helped change the course of World War II.

The sea of mercury blue couldn’t have been more peaceful as the sun rose Thursday over Omaha Beach. About 100 people gathered at dawn on the edge of the waters that ran red here on June 6, 1944, the first of five code-named beaches where Allied forces came ashore to push the Nazis out of France.

Norwegian Sigrid Flaata drove from Oslo in a 1942 restored jeep to honor the soldiers who died on D-Day. Belgian Filip Van Hecke called his journey a “small effort to pay homage.”