The sky is not the limit for the first direct-enlisted members of the U.S. Space Force 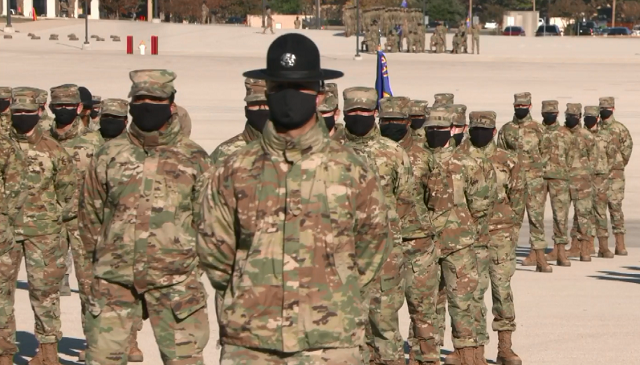 SAN ANTONIO (KTSA News) -The first seven people to enlist directly into the U.S. Space Force made history Thursday when they graduated from Basic Military Training with more than 400 other Airmen Thursday at Joint Base San Antonio -Lackland.

The virtual ceremony included a flyover of F-16s , speeches, marching and the distribution of the first U.S.Space Force coins.

“She still holds the world record for the longest spacewalk –eight hours and 56 minutes,” Barrett said.  “So, it is fitting that we celebrate the historic milestone of graduating the first seven trainees to the United States Space Force.”

““I need you to be bold. You will help us build this service from the ground up. You will help us define our warfighting culture. You will build the Space Force as the first digital service,” said Raymond.  “You will lay the foundation of a service that is innovative and can go fast in order to stay ahead of a significant and growing threat, and you, if deterrence fails, will fight and win the battle for space superiority which is so vital to our nation, our allies and our joint and coalition forces.”

The seven Space Force Professionals will attend Space Systems Operations technical training at Vandenberg Air Force Base, California. Once that training is complete, they’ll perform a wide range of duties from detecting ballistic missiles and tracking satellites to assisting in rocket launches and space flight operations.

The graduation ceremony comes just 10 days before the first anniversary of the U.S. Space Force, which was activated Dec. 20, 2019.