The Taliban has robbed Afghan women of work, school and safety 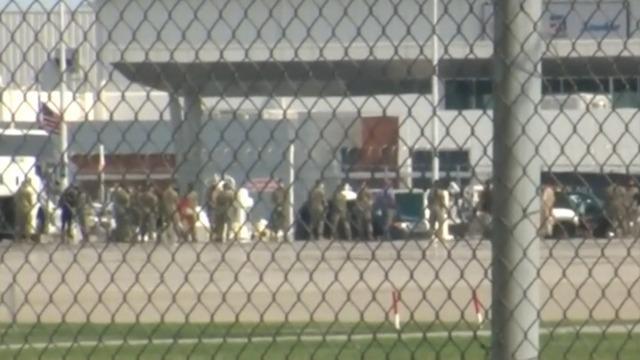 ▶ Watch Video: Afghan women fear for their safety under Taliban rule
In a November 2001 weekly radio address to the American people, first lady Laura Bush said American troops had invaded Afghanistan to fight terrorism and rescue Afghan women from the Taliban’s oppression and brutality. She called it “a fight for the rights and dignity of women.”

The toppling of the Taliban regime and the ensuing 20 years of war did deliver significant gains for women’s rights. But it has taken the Islamic extremists just over a month to erase those hard-won achievements.

The new Taliban regime, which looks remarkably like the one that ruled over the country until it was toppled by the U.S.-led invasion, has closed the government ministry dedicated to women’s affairs. It’s preventing female students from returning to schools and universities. Female workers in an array of professions have been told to stay home until further notice. Videos show Taliban enforcers flogging women on the streets, in broad daylight, for unknown transgressions.

Vulnerable women with “nowhere to go”

On September 16, Taliban officials removed signs identifying the Ministry of Women’s Affairs from the government building in Kabul. They were immediately replaced with new signage heralding the return of the long-feared “Ministry for the Propagation of Virtue and Prevention of Vice.”

The Ministry of Women’s Affairs, established soon after the Taliban were toppled in 2001 and boasting 90% female staff, was tasked with empowering and protecting the country’s women and girls. It has run safe houses for women fleeing abusive families for years, and it has saved hundreds of women’s lives every year, according to Halima Prastish, who was the director of women’s affairs in Ghor province before she fled into hiding.

Prastish said that after the Taliban takeover, she had to hand 30 vulnerable women back to families with whom they had faced threats of violence, including death.

“One of them was accused of eloping with a man,” she told CBS News. “The man was arrested and killed, and we had saved the woman.”

Another woman had been sentenced by the Taliban to die by stoning for running off with a man when she was already engaged.

“We had to hand over both of them to their families, and I don’t know what happened to those two women,” Prastish told CBS News.

Prastish also doesn’t know what became of an eight-year-old girl who had been under the care of her office. The girl had been married, Prastish said, to a 30-year-old man with a drug addiction “who was coming to our office daily, demanding to handover his eight-year-old wife. We had to give her to him in the end.”

“We were the only source of hope for thousands of women,” Prastish said. “Now in the absence of Ministry of Women’s Affairs, they have nowhere to go.”

On August 24, nine days after the Taliban retook control of Kabul, spokesman Zabihullah Mujahid formally announced that working women should stay at home — for their safety, he said, because the group’s fighters weren’t trained to respect women.

But as they grappled with a snowballing humanitarian crisis as most foreign aid money dried up, on top of the coronavirus pandemic, the country’s new rulers soon realized that female nurses and doctors, at least, were still needed on the job. They were urged to return to work.

But for countless other Afghan women and girls, many of whom won’t even remember the dark days of the Taliban’s first reign, life has been upended, and they have lost far more than careers and income.

Maqsooda lost her job as a university lecturer after the Taliban takeover. The university told her that she would be on unpaid leave until further notice.

“I have studied for many years, earned my PhD and hoping to have a better and independent future,” Maqsooda, who didn’t want to use her full name, told CBS News. “I lost my only source of income.”

Living alone as a woman — something the Taliban would not condone — Maqsooda has other concerns. She found a couple pairs of men’s shoes to leave outside her apartment door, “so the Taliban don’t find I live alone.”

Education under the Taliban

On September 12, the Taliban’s acting Minister of Higher Education announced a new policy for female university students. Abdul Baqi Haqqani said women would be allowed to resume their studies, but not until they can do so “according to Islamic principles.” That, under the Taliban, means not alongside male students.

To make that possible, Haqqani said universities would have to educate male and female students in separate buildings, at different times, or partition classrooms and lecture halls. He acknowledged that wouldn’t be practical for many universities, at least not any time soon, so there’s no indication when or if women will be allowed to return to Afghanistan’s universities.

On September 17, the Taliban’s Ministry of Education announced the resumption of high school classes across the country after a month-long pause during the chaos of the group’s takeover. But the reopening only applies to male students and teachers. There was no mention of female students returning to classes.

The announcement was met with national outrage and international criticism.

A few months ago, Rowanda Abrar, an 11th-grade student in Kabul, was preparing for her university entrance exam. Now she’s angry, sad and defiant.

“Women are half of the society. Why are the Taliban preventing us from learning?” she asked as she spoke to CBS News on the phone, through tears. “They cannot silence us.”

“If girls are not allowed to go back to school, this will be a shocking violation of their rights,” said Janti Soeprito, president of the Save the Children charity.

The Taliban’s spokesman, Mujahid, has insisted that the de-facto ban on education for women and girls is only temporary. He said the Ministry of Education was working to create a safe educational environment for all students, but he didn’t say when he expected that to happen.

Many doubt it ever will, as the Taliban barred girls from any formal education during their previous rule.

But Abrar, born several years after the Taliban was ousted in 2001, isn’t prepared to accept that.

Since the Taliban took Kabul on August 15, scores of Afghan women and rights activists have taken to the city’s streets several times, demanding their rights and inclusion in the government. Every time, they’ve been set upon by Taliban foot soldiers doling out beatings and humiliation with sticks, whips, tear gas and gunfire.

Hoda Khamosh, who organized the protests in the capital, told CBS News that it was the Taliban’s announcement of an all-male interim cabinet that sparked the protests.

She said the Taliban beat one of her colleagues, Nargis Sadat, during one of the demonstrations. Sadat shared a video with CBS News that shows her bleeding from her forehead after the encounter.

Other videos have emerged on social media showing protesters, and even a woman seemingly just crossing the street, being beaten by Taliban enforcers.

“We take this risk and protest to show the Taliban that we are not women of 1990, to be scared of whipping and forcing us to wear hijabs or forced marriage,” Khamosh told CBS News. “Taliban should win people’s minds and hearts through talks, not through the whip, beatings and extremism.”