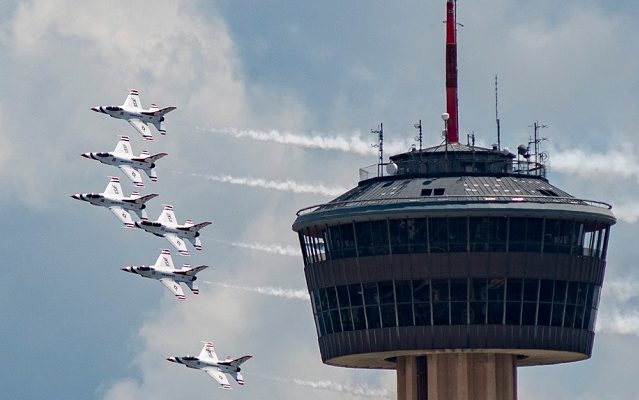 The flyover was to honor healthcare workers, first responders and others on the frontlines in the fight against COVID-19.

Tiffanie Cuellar, an emergency room physician assistant, was surrounded by family  members in the parking lot of Kitty Hawk Middle School near Joint Base San Antonio-Randolph.

“They just literally flew right over our heads, so it was an awesome sight,” Cuellar said. “I’m very grateful and thankful to them for  paying tribute to healthcare workers.”

Scott Fitzgerald retired from the Air Force and currently works for the Army.

“To see that military pride flyover shows that the United States can stand as one,” said Fitzgerald. “Look at how many people came out here, keeping their social distancing and doing everything the way it’s supposed to be done in these times, yet everybody enjoying the same pride in what’s going on.”

Although the flight over Kitty Hawk Middle School lasted about 30 seconds, Fitzgerald’s daughter, Kenslee, said she enjoyed it.

“They flew over so fast and its was really cool,” she said.

Veronica Ulrich and her children were enjoying the shade from a beach umbrella they set up in the parking lot next to their vehicle.

“It’s such a  positive impact, especially in this crazy time that we’re living in.  Plus, it gives the kids something to look forward to and it’s exciting to them and it’s not everyday that the Thunderbirds come to San Antonio.”

Roberta Whitley was grateful that the Air Force chose San Antonio as one of the Thunderbirds’  America Strong  flyovers.

“It just gives everybody high spirits and hope,” she said.