Time, misinformation complicate teaching 9/11 to kids born after it 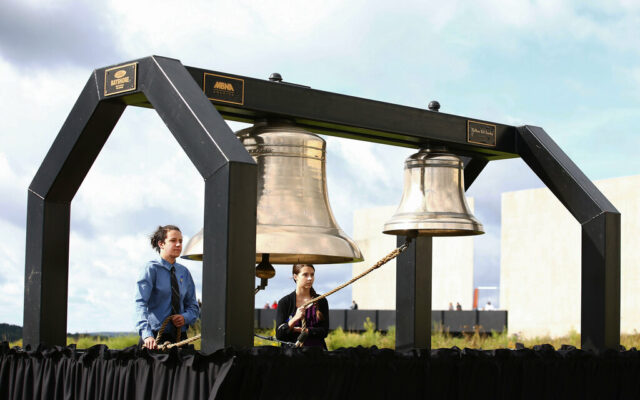 FILE - Matthew Prosser and Gina Rhoads of Shanksville-Stonycreek High School ring the Bells of Remembrance during the service of remembrance tribute to the passengers and crew of Flight 93 at the Flight 93 National Memorial in Shanksville, Pa, Sunday, Sept. 11, 2016, as the nation marks the 15th anniversary of the Sept. 11 attacks. (AP Photo/Jared Wickerham, File)

COLUMBUS, Ohio (AP) — Nagla Bedir didn’t discuss Sept. 11 with her New Jersey high school students last year. Mid-pandemic, with remote learning, it wasn’t a conversation she wanted to have via computer screen. But this year, returning to the classroom just after the end of America’s longest war, she figures she can’t not teach about it.

So later this month — after students in her international diplomacy class have introduced themselves and agreed on how they’ll have respectful conversations — she plans to ask two questions: What do you know about 9/11, why it happened, and the aftermath? And how is it connected to Afghanistan?

She isn’t sure what they’ll say, but she’s set on having the discussion.

Along with packed curriculums and calendars, those are just some of the challenges of teaching about Sept. 11 to kids born since that day, who get so much of their information from online and social media spaces, and sometimes don’t have the interest or media literacy to differentiate truth from conspiracy theories that persist 20 years later.

Today’s students don’t have memories from that day but have heard about it all their lives, and that’s bound to lead to questions, says Jennifer Grygiel, a Syracuse University professor who researches social media and the internet. If they aren’t given factual information that helps them understand what happened and why, untruths can fill the void.

“Conspiracy theories take root when there are unknowns, and there were so many unknowns about that day,” Grygiel says. “In the absence of information, people go online. And what do they find? It depends.”

An online search for content related to 9/11 conspiracy theories turns up millions of hits: videos, blogs and whole websites devoted to different theories, as well as accurate information that attempts to debunk the myths. Platforms like YouTube and Facebook say they’ve taken steps to curb the spread of 9/11 misinformation by promoting authoritative information about the attacks, or by adding links to other sources that debunk myths.

Questions about conspiracy theories and 9/11 misinformation often arise in training that the National Sept. 11 Memorial & Museum has offered for hundreds of teachers, according to Noah Rauch, its senior vice president for education and public programs. The subject comes up so much that it developed specific sessions for teachers who want to use 9/11 and related conspiracy theories to teach critical thinking skills.

Longtime history teacher Kathy Durham uses 9/11 to teach her high schoolers in rural West Wendover, Nevada, about perspectives and primary sources, looking at documentaries and old news coverage and requiring them to talk to adults who remember that day.

Occasionally students claim the attacks were an inside job, and Durham says she pushes them to analyze the credibility of sources and evidence.

“It’s really, really a delicate thing, because my job is to teach kids to think and not tell them what to think,” Durham says.

Some schools teach about 9/11 around the anniversary, briefly discuss it in contemporary history classes or incorporate resources offered by the memorial, the government, nonprofits or teachers unions. Often the approach is up to the educator, even in states where education standards require it for certain grades or classes.

“I think that the way it’s been taught has largely been memorializing the events versus really digging into the context of 9/11 and the ongoing sort of results of 9/11,” says Jeremy Stoddard, a University of Wisconsin-Madison professor who has researched that subject.

In the early years, it was an emotionally charged topic, but now more of the challenge is engaging students so distanced from it, says Anthony Gardner, whose brother Harvey died at the World Trade Center. Gardner founded the September 11th Education Trust, which released a curriculum to help teachers incorporate 9/11-related lessons not just on the anniversary but in coursework throughout the year.

It’s important, Gardner says, that students hear about those who died, the aftermath, related deaths that came later, and the lessons learned.

“We made that pledge to never forget,” he says.

Corey Winchester, a high school history teacher in Evanston, Illinois, tries to teach about Sept. 11 not as just a moment in time but “something that we’re still interacting with” and a lesson about perspectives. That means he might make connections to it while teaching about internment of Japanese-Americans or the Vietnam War, he says.

For some teachers, incorporating personal stories helps drive home the wide impact of 9/11. Liz Prince is having her fifth graders at DeSoto Central Elementary school in Southaven, Mississippi, record an interview with someone they know about a Sept. 11 experience, then share it with classmates. She also ordered books to help with age-appropriate explanations about places that were targeted and people who died.

But Prince says she’s not ready to discuss Afghanistan, which she considers too political for her classroom.

At Princeton High School outside Cincinnati, social studies teacher Jim O’Connor has fielded questions from his students about why U.S. troops were in Afghanistan for so long. He says he’ll tell them his memories about teaching on the day of the attacks, and how, as part of the Air National Guard, he later had to help deploy friends to Iraq. He hopes talking about the sense of patriotism and unity that emerged reminds students that such things are possible.

In New Jersey, Bedir plans to outline the basics of what happened, then have students explore the timeline of U.S. involvement in Afghanistan since even before 2001. She, too, anticipates recounting her own experience, when she was a student herself.

She was 11, attending a school with a view of the smoking New York skyline. Her parents feared for her safety as anti-Muslim sentiment rose after the attacks, and she says they halted her plans to begin wearing a hijab.

She ended up waiting a decade.