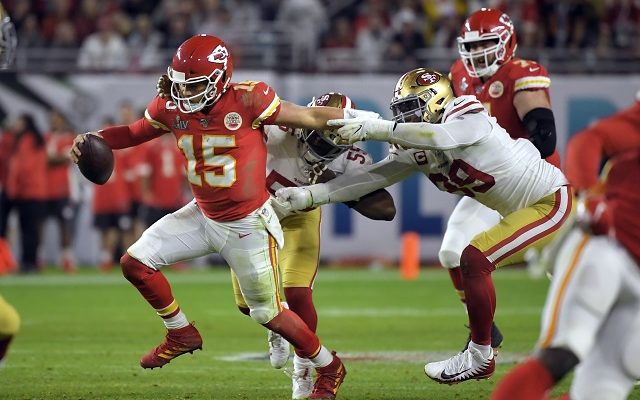 MIAMI GARDENS, Fla. (AP) — They were celebrating the passage of time as much as football at this Super Bowl: 100-year-old war veterans at midfield for the pregame coin flip, a 50-years-young pop diva handling halftime, and, of course, a quarterback who turns 25 this year saving the best part of the show for last.

That quarterback is Patrick Mahomes of the Kansas City Chiefs.

It is easy, especially after the improbable, blink-and-you-miss-it escape act he engineered to win the title Sunday, to say Mahomes — a mobile, dual threat with a rocket arm — is what the perfect quarterback will look like as the NFL gets ready to embark on its second century of football next season.

But what Mahomes did on a cool, crisp evening in South Florida was grounded in the most basic of sports concepts, one that harkens to the days of leather helmets and long bus rides to the games.

“My mindset,” Mahomes said, “is always to play and compete to the very end.”

And so he did. He injected life into a stymied offense that looked all but done-for, coaxed three touchdowns out of that offense over the short span of 5 minutes, 1 second late in the fourth quarter and pulled out a 31-20 victory over San Francisco in a game that seemed all but lost.

Three times during this postseason, Mahomes and the Chiefs have trailed by 10 points or more, and all three times they’ve come back to win by double-digits themselves. That’s a first. But even that history-making feat doesn’t do justice to what Mahomes pulled off in the final game of the NFL’s much-celebrated centennial.

After Mahomes threw the first postseason interception of his three-year-old career —”I hit him right between the ‘5’ and the ‘4,” he said of the pick to linebacker Fred Warner — the 49ers drove 55 methodical yards to take a 20-10 lead.

There was 2:35 left on in the third quarter and the Chiefs, used to buzzing up and down the field to the tune of 51 and 35 points in the two earlier games this postseason, had gained 187 yards and amassed only 136 passing. They had scored a measly touchdown and a field goal and hadn’t cracked a single play longer than 19 yards.

“I wasn’t feeling good about it at all,” said receiver Tyreek Hill, who would soon prove critical in turning around the game. “I told Pat, ‘It’s 20-10 with seven minutes left — c’mon bro,’ And all Pat did, he just told me to believe.”

Hill believed. And he started running.

Up against a defense that had allowed a total of eight completions on downfield throws all season, the receiver with track-star speed somehow found a soft spot deep in the 49ers secondary. Mahomes, harassed all night into quick, off-target throws, dropped 13 yards behind the line of scrimmage, surveyed the field — then stepped up and heaved it. The ball dropped soft as a feather into Hill’s arms. Four plays later, Kansas City, only moments earlier thinking of concession speeches, was within three points.

“I’m not sure exactly what happened,” 49ers coach Kyle Shanahan said, when asked to reflect on the play that swung the momentum.

Rarely has a game turned so rapidly. Rarely has a team still behind on the scoreboard seemed so destined to win.

It all happened so fast, in fact, that everything before it felt like a mirage.

Hours earlier, to celebrate its 100th year, the NFL brought four centenarian World War II veterans to midfield to preside over the pregame coin flip. Halftime featured a hip-shaking, pole-climbing celebration of Latina heritage, courtesy of 43-year-old Shakira and Jennifer Lopez, who hardly looked like the 50-year-old she is — where has the time gone?

Chiefs fans had been asking the same question for a while now.

It had been 50 years since their team last appeared in, and won, the Super Bowl. Mahomes, the quarterback who coach Andy Reid handpicked and traded away draft picks to get, was supposed to change all that.

But when the smoke cleared from J-Lo and the third quarter started, he was no better.

“We knew it would be a close game, and there would be some challenges,” Reid said. “He kept firing. That’s what he did. The guys around him just believed in him. We all did.”

After the touchdown that made it 20-17, it took all of three plays for the Chiefs defense to get the ball back to Mahomes.

On the next possession, he struck for another long play — this one to receiver Sammy Watkins who torched the 49ers premier defensive back, Richard Sherman, at the line of scrimmage and got behind him for the easiest 38-yard catch he’ll ever make. Three plays later, it was 24-20.

Less than 90 seconds after that, it was 31-20, and long-suffering Kansas City had won the Super Bowl.

It didn’t take long for the questions to start coming about a young team with a young quarterback and a grizzled old coach in Reid who thinks young: Could this be the first of many?

“I mean, obviously, I’ve had a great start to my career,” said Mahomes, who finished with 286 yards, two touchdowns and two interceptions, in flicking it away.

Does he see himself as the new face of the NFL?

“There are a lot of young quarterbacks, and still a lot of veteran guys that are playing at a very high level,” he said. “So, I just try to be the best Patrick Mahomes I can be.”

Which, as the Niners, the NFL and the entire Super Bowl-viewing audience discovered Sunday night, was certainly good enough.