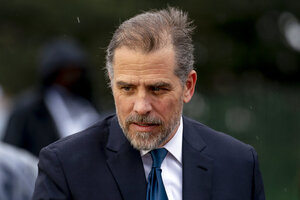 If Republicans take control of the House in the next Congress, the House Oversight Committee’s top priority will be investigating Hunter Biden, the president’s son. That’s according to Kentucky Congressman James Comer, the top Republican on the committee, who spoke with CBS News chief Washington correspondent Major Garrett for this week’s “The Takeout” podcast.

“I believe that his son is that corrupt,” Comer said.

He accused Hunter Biden of profiting off his last name and Joe Biden of protecting his son’s interest.

“Any father would probably do that,” he said. “But the problem is Hunter Biden is a national security threat.”

President Biden has said that he has had no involvement in his son’s business deals. Hunter Biden’s business ties are being scrutinized by the Justice Department.

Garrett asked whether the committee has enough evidence to link Hunter Biden and his father and whether it could amount to an impeachment proceeding against the president.

“I haven’t seen that yet,” Comer said.

Comer, who expects to become chairman of the committee in a Republican-controlled chamber, is concerned the Justice Department could file an indictment against Hunter Biden after the midterms, inadvertently helping the president’s son by stymying the investigation.

“That indictment then would make it hard for our subpoena to be effective with Hunter,” Comer said, adding that a potential appointment of a special counsel to Hunter’s case would make it “impossible” to get Hunter to testify in front of a congressional investigative committee.

Who else could receive a subpoena if and when Comer takes the chairman’s gavel? Infectious disease expert Dr. Anthony Fauci.

Dr. Fauci has maintained that COVID-19 likely resulted from a “natural occurrence,” as opposed to a lab leak in Wuhan, China, telling a Senate committee this week that the virus likely jumped from “an animal host, perhaps through an intermediary host, into a human species, which then spread throughout the human population.”

Comer does not believe that analysis and suggests the government isn’t doing enough to uncover the disease’s origins.

“We are not going to let up on that,” Comer told Garrett. “I think the American people deserve to know the truth about COVID 19. They deserve to have a government try to actually find the truth about where the COVID 19 originated from.”

On a previous episode of “The Takeout,” Dr. Fauci said he would welcomes congressional scrutiny of his work and has nothing to hide.

Comer also wants to investigate the handling of migrant activity at the U.S.-Mexico border. Even though Border Patrol agents along the southern border recorded 222,000 apprehensions in May — an all-time monthly high — he claims that the administration’s policies are inviting “even more people” to come.

Homeland Security Secretary Alejandro Mayorkas, he said, would be a prime target for impeachment.

“He’s at the top of the list because he’s not doing his job on the border. It’s getting worse every day.”

Comer has represented his Kentucky district in Congress since 2017 and regularly flies home with Senate Minority Leader Mitch McConnell.

Comer said McConnell and President Trump have never been “fond” of one another and the relationship has only deteriorated since Trump lost his 2020 reelection.

“I think one of the things that Trump never liked about McConnell is the fact that at the end of the day, he tried to get to 60 (votes in the Senate). And if you get to 60, you’re going to have to get a few Democrats along the way.”

A “circular firing squad doesn’t seem to do much good for your side,” Comer lamented.

Highlights from this week’s episode: