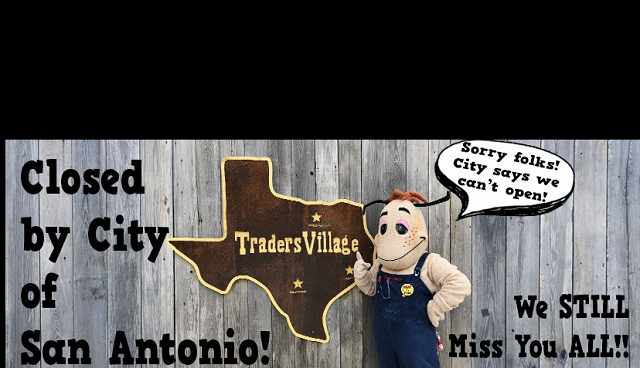 SAN ANTONIO (KTSA News) – The president and the general manager of Traders Village are scheduled to meet with the San Antonio City Manager Tuesday morning to discuss the possibility of reopening the flea market this weekend.

The giant flea market on S. W. Loop 410 near Old Pearsall Road was all set to reopen last Saturday at 25-percent capacity like malls and retail stores, but the city notified them Friday that they had to remain closed.

“Unless the business is expressly listed as a reopened business or an essential business with the governor’s order, the governor retains the right to open or close that business,” Mayor Ron Nirenberg said Monday evening during the COVID-19 briefing when questioned about the Traders Village flap.

Spokesman Brian Billeck says the flea market should fall under the category of a shopping mall with several retail stores or in this case, vendors.

“They all hold certificates from the city and the state for their tax license that states that they are a retail outlet.  So do we,” said Billeck.

The city then told Traders Village that they couldn’t open because of the restrictions on large outdoor gatherings.  Billeck says he doesn’t understand why the Traders Village in Grand Prairie and Houston were allowed to open, but the one in San Antonio was not.

“They had no problems.  Both did a very good  job and the customers maintained social distancing,” Billeck said.

Billeck says the meeting is a good start.

Meanwhile, Traders Village also was scheduled to host another San Antonio Food Bank giveaway Tuesday morning.  The last one made national headlines when about 10,000 people showed up.  Billeck says about 2,500 people had registered with the food bank  for the latest grocery giveaway scheduled from 9 to 11 Tuesday morning.