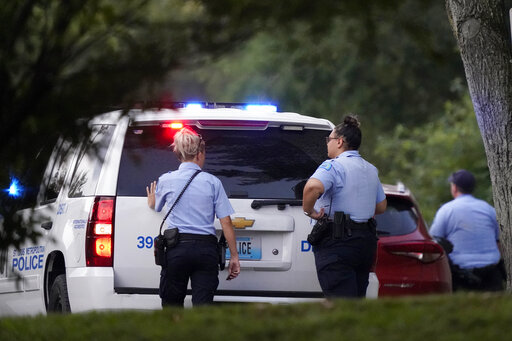 Police take up positions near the scene of a shooting Saturday, Aug. 29, 2020, in St. Louis. The St. Louis Police Department says two of their officers have been shot and a suspect is believed to be barricaded in a house nearby. (AP Photo/Jeff Roberson)

ST. LOUIS, Mo. (AP) — Authorities say a St. Louis police officer who was shot in the head while responding to a shooting on the city’s south side has died.

Twenty-nine-year-old Tamarris L. Bohannon had been with the department for nearly four years.

A second officer who was shot in the leg Sunday was treated and released after the shooting around 6 p.m. in the South Grand neighborhood near Tower Grove Park.

The gunman barricaded himself inside a home and police negotiated with him for nearly 12 hours before the 43-year-old was taken into custody Sunday morning.

Police have released no details about his arrest.