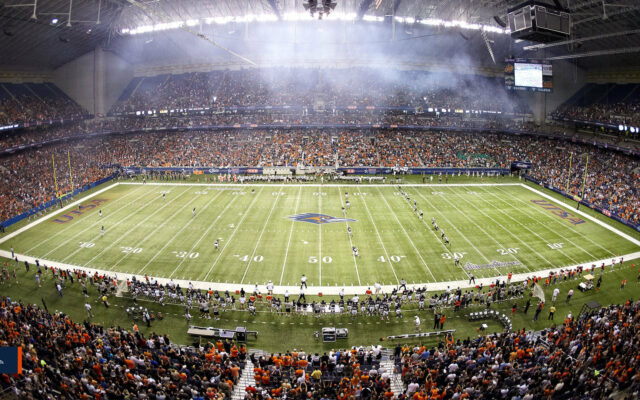 SAN ANTONIO (KTSA News) — It’s been a historic season for the UTSA Roadrunner football team as they are ranked nationally for the first time in the program’s short history, and ESPN is reporting that Texas Tech has taken notice.

Texas Tech fired head coach Matt Wells yesterday after a hard loss to Kansas State that saw the Red Raiders blow a 14-point lead in the second half. Tech is now 0-2 at home against Big 12 teams and the remaining in conference schedule pits the Red Raiders against No. 4 Oklahoma, No. 22 Iowa State, No. 15 Oklahoma State and No. 16 Baylor.

ESPN reported today that there are two Texas coaches at the top of Texas Tech’s coach wishlist: UTSA’s Jeff Traylor and SMU’s Sonny Dykes. Both Texas teams are ranked, with UTSA at 23 and SMU at 19. Both teams are undefeated. KENS5 is reporting that former Baylor head coach Art Briles and Arkansas offensive coordinator Kendal Briles are also on the list.

The UTSA team is led by head coach Jeff Traylor, who took over the position last year after Frank Wilson was fired from the program. Traylor is the third coach since the Roadrunner’s inaugural season in 2011.

San Antonio Sports Star’s Jason Minnix spoke with Traylor yesterday as the rumors started circulating and the coach said he’s been open and honest with the team.

“We expected to have a really good football team, most kids all understand that with my Texas connections, any Texas job that comes open [means] my name’s probably going to be involved in it,” Traylor said. “… My kids know I’m very committed to this place [and] I’m very excited about the future of our place.”

Traylor said that athletic director Lisa Campos and president Taylor Eighmy have “been nothing but helpful” and know that he is committed to the Roadrunners program success.

“We also know we’re going to the AAC and that is a huge step up,” Traylor said. “We’re gonna have to make a bigger commitment for us to be successful and I’m really excited about all that.”

You can listen to the full interview on SA Sports Star here.

UTSA announced last week that the Roadrunners will be joining the American Athletic Conference in a huge move that signals the school is “on an amazing upward trajectory with a very bright future,” Eighmy said.