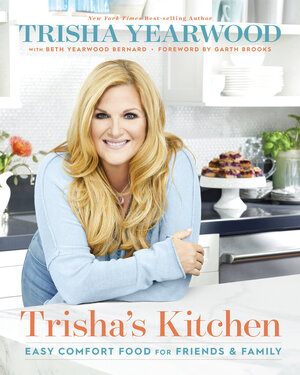 When the country star and her collaborator and sister, Beth, made them the first time at her Nashville home, they didn’t tell Brooks and his buddy what was in them when the two men came into the kitchen after working on their farm.

“I said, ‘You try this.’ Didn’t tell them what it was. And they ate them all. They were like, ‘These are amazing!’” Yearwood recalls. “And then I told him he ate his collard greens for the day.”

The quirky South-meets-Asia wontons are a feature of Yearwood’s fourth cookbook, “Trisha’s Kitchen: Easy Comfort Food for Friends and Family,” which has 125 recipes that blend her knowledge of soulful Southern cooking with influences from China, Italy and Mexico.

“I’ve entered into a really cool phase and I really attribute the show for just giving me confidence to try new things. And now they’ve become kind of family favorites and they feel like things that have been in the family forever,” she says.

Yearwood is open to ideas, even asking at restaurants how the chefs make favored dishes. She walked away from a sushi restaurant in Tulsa, Oklahoma, with the origins of Garth’s Teriyaki Bowl, which uses marinated chicken and steak.

That same restaurant inspired her Steak & Avocado Rolls, which use soy wrappers to mimic sushi rolls. Neither Yearwood nor Brooks are fans of raw fish — “we’re sort of roll-it-in-flour-and-fry-it people,” she confesses — but their girls are, so the recipe is a compromise.

Yearwood also leaned on several family recipes for dishes in the new book, including some from her dad’s mom. Her grandmother was a dessert specialist but none of her recipes seemed to have survived until the family recently found a little book with handwritten recipes, including one for Hundred Dollar Cupcakes. Trisha and Beth also recreated a dish that was never written down, Jack’s Fried Pies, named after her father.

Jerky turns out to have a special place in her kitchen, and yet she has learned that she doesn’t need fancy equipment or a dehumidifier to make her BBQ or teriyaki jerky. She just turns on her oven.

“It’s really a low and slow in the oven, like at 200 degrees for hours. It’s not expensive to do. You can get a really inexpensive cut of meat and slice it yourself, or you can have your butcher slice it in the strips for you and then you marinate it and then you just slow bake it. Then it can be as tender or as tough as you like,” she says.

Other nifty recipes include one for Camo Cake she made for her nephew’s birthday that uses food coloring to mimic the look of camouflage, and Chicken Potpie Burger, which combines a classic chicken potpie with a bun.

“Everything that’s in the book is the way she really is and the way she really cooks. And it is a reflection of her life and her personality,” says Deb Brody, vice president and publisher of adult trade at Houghton Mifflin Harcourt. “It’s not just a celebrity putting her name on a cookbook. She actually cooks this way.”

“When I’m cooking, if there’s bacon going on a burger or something, anybody at my house walks by and they’re going to take a piece of bacon. We all just want the bacon, like, it doesn’t have to be on anything,” she says. “So this was that idea of making it its own thing, making it an appetizer and it’s crunchy and crispy. You just walk by and grab one — or 10.”

The pandemic accelerated the book’s creation, with Yearwood’s touring scheduled stilled and lockdown forcing her into her kitchen. Easy comfort food was a natural way for her to cook her way out of quarantine.

“I did a lot of sitting on the couch and drinking coffee and going down the rabbit hole of depression. But then — I think it was getting close to a few months in — I was like, ‘This would be a perfect time just to write a new book,’” she says.

“It kind of had been knocking on the door, almost like when you need to make a new album. In a way, it was really therapeutic and cathartic for me to be able to focus on something like that, because food really does bring us together.”