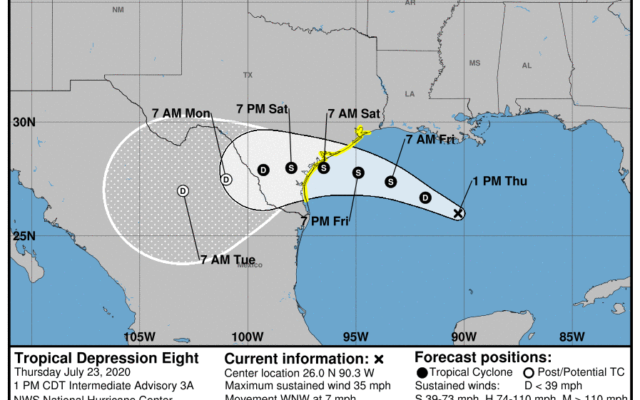 BEXAR COUNTY, Tex. (KTSA News) — A tropical storm is expected to visit South Texas this weekend and a tropical storm watch is in effect for the Texas Gulf Coast from the Houston/Galveston area to Padre Island.

The National Hurricane Center said a tropical depression in the Gulf of Mexico — currently south of Louisiana — will become Tropical Storm Hanna Friday and will move west onto the Texas Gulf Coast by Saturday.  Landfall is currently expected to be somewhere between Corpus Christi and Port Lavaca, though the forecast track can change.

The storm is expected to continue to the west across South Texas and downgrade into a tropical depression as it approaches the Mexican border near Laredo.

The National Weather Service said the heavy rainfall is expected to stay south of Interstate 10 and U.S. Highway 90, though a more northerly track would bring more rain to the San Antonio metro area.

Currently, the San Antonio area is expected to see two to three inches from the storm, higher totals near the gulf coast.  Forecasters say flooding is to be expected from this storm for parts of south-central Texas.

The tropical depression, as of 1 p.m. Thursday, currently has maximum sustained winds of 35 miles per hour.