Truckers brace for a police crackdown in besieged Ottawa 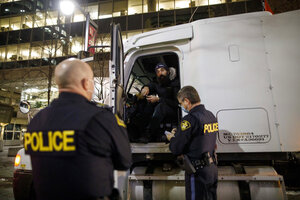 OTTAWA, Ontario (AP) — Hundreds of truckers clogging the streets of Ottawa in a protest against the country’s COVID-19 restrictions braced for a possible police crackdown Thursday, nearly three weeks into the siege that has shaken Canada’s reputation for civility and rule-following.

Work crews in the capital began erecting fences outside Parliament, and police appeared to be out on the streets in greater numbers than usual in the morning.

On Wednesday, Ottawa police handed out leaflets warning the truckers to leave immediately or face arrest and other sanctions.

Many protesters reacted to the warnings with scorn.

“We want the mandates over for the whole the country. End the mandates,” protest leader Pat King said outside the prime minister’s office Thursday morning. As for the rigs parked bumper-to-bumper, he said: “There’s no tow trucks in Canada that will touch them.”

The warnings from police came two days after Prime Minister Justin Trudeau invoked Canada’s Emergencies Act, empowering law enforcement authorities to declare the blockades illegal, tow away trucks and punish the drivers by arresting them, freezing their bank accounts and suspending their licenses.