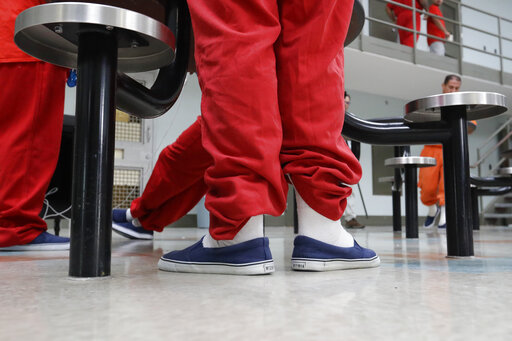 In this Wednesday, Aug. 28, 2019, photo detainees gather in a common area at one of the housing units at the Adelanto ICE Processing Center in Adelanto, Calif. The facility is a privately operated immigration detention center run by the GEO Group, which can house up to about 1900 total immigrant detainees, both male and female. (AP Photo/Chris Carlson)

WASHINGTON (AP) — Pressure is mounting on the Trump administration to release people from immigration detention facilities where at least one detainee has already tested positive for COVID-19.

Advocates fear tight quarters and overall conditions could cause rapid spread of the virus. ICE says it is screening new detainees and isolating people who show symptoms of the disease.

But detainees and advocates say those measures are not enough, especially for people particularly at risk because of their age or pre-existing medical conditions.

Advocates have filed suits around the country, and a federal court in San Francisco has ordered one woman immediately released because of the outbreak.