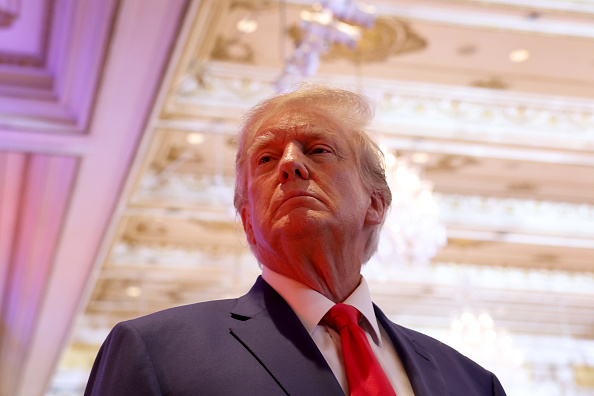 PALM BEACH, FLORIDA - NOVEMBER 08: Former U.S. President Donald Trump speaks to the media during an Election Night at Mar-a-Lago event on November 08, 2022 in Palm Beach, Florida. Trump spoke as the nation awaits the results of voting in the midterm elections. (Photo by Joe Raedle/Getty Images)

Fry, a state representative, handily defeated Democratic challenger Daryl Scott in the general election. The incumbent Rice had become a focus of Trump’s scorn for the congressman’s impeachment vote after the Jan. 6, 2021, U.S. Capitol riots.

It marks the first time in 10 years that voters in the district will send a new elected official to Washington, D.C.

COLUMBIA, S.C. (AP) — Republican Rep. Nancy Mace is seeking to hang on to her Charleston-area U.S. House seat in Tuesday’s election after control of that South Carolina district has seesawed in recent years between Democrats and the GOP.

The freshman congresswoman faces challenger Annie Andrews, a pediatrician who supports access to abortions in the red state and greater restrictions on guns in a bid to stop waves of U.S. shooting violence. Meanwhile, the national inflation rate has made for unfriendly headwinds for the incumbent president’s party.

South Carolina’s 1st Congressional District has been on a pendulum ride since 2018. Democrat Joe Cunningham, who is now running for governor, won the 1st District seat that year before losing to Mace in the following election.

Mace won a Republican primary earlier this year that had become a test of former President Donald Trump’s influence after he had endorsed her primary opponent.

With Trump’s backing, Fry ousted five-term Rep. Tom Rice in the June primary. Rice was the first of the 10 House Republicans to lose a reelection bid after he had voted to impeach Trump after the U.S. Capitol riots.

In the 2nd District, Republican U.S. Rep. Joe Wilson — who has held onto his seat since 2001 — won reelection against Democratic challenger Judd Larkins.

Check out https://apnews.com/hub/explaining-the-elections to learn more about the issues and factors at play in the 2022 midterm elections.