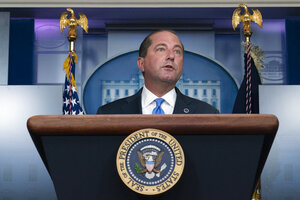 WASHINGTON (AP) — Trying to pull back the veil on health care costs to encourage competition, the Trump administration on Thursday finalized a requirement for insurers to tell consumers up front the actual prices for common tests and procedures.

The late-innings policy play comes just days ahead of Election Day as President Donald Trump has been hammered on health care by Democratic challenger Joe Biden for the administration’s handling of the coronavirus pandemic and its unrelenting efforts to overturn “Obamacare,” the 2010 law providing coverage to more than 20 million people.

A related Trump administration price disclosure requirement applying to hospitals is facing a federal lawsuit from the industry, alleging coercion and interference with business practices.

The idea behind the new regulations on insurers is to empower patients to become better consumers of health care, thereby helping to drive down costs.

But the requirements would take effect gradually over a four-year period, and patients face a considerable learning curve to make cost-versus-quality decisions about procedures like knee replacements or hernia repairs. Add to that political uncertainty about the policy’s survival if Trump doesn’t get reelected, and the whole effort is running into skepticism.

“It will be impossible to walk backwards on this,” Health and Human Services Secretary Alex Azar said. “How do you fight transparency on prices? How do you actually articulate the argument that you should conceal what something costs from the person trying to purchase it?”

Insurance companies contend that the rules will boomerang economically, driving up costs. Hospitals and doctors now accepting discounted rates will press to get paid more once they see what their upper-end competitors are getting.

The new rules are being issued jointly by HHS, the Labor Department and the Treasury, which share jurisdiction over health insurance plans. They would:

— Starting in 2022, require insurers to make available data files on the costs of various procedures, allowing technology companies to design apps that let patients see costs not only under their own plan but other insurers’ plans as well.

— Starting in 2023, require insurers to make available to their policyholders cost-sharing details on 500 specific services, medical equipment and other items, as called for by the government.

— Starting in 2024, require insurers to make cost-sharing information available on all the services and goods they cover.

Patients would use an online shopping tool from their plan to see the negotiated rate between their doctor and the insurer, as well as an out-of-pocket cost estimate for procedures, drugs, durable medical equipment and any other item or service they may need.

The information would be available ahead of time, enabling an informed decision. Currently, most patients find out what they owe after they get back from the hospital and receive their “explanation of benefits” statement.

“We need to keep pricing on the front end, not the back end,” said Seema Verma, head of the Centers for Medicare and Medicaid Services. “We have seen in every single industry that when this information is provided to consumers, it creates a new era of consumerism.”

Verma said administration officials have been working to foster price disclosure since 2017, soon after Trump, a Republican, came into office.

If the Trump rules withstand legal review, it’s unclear to what degree patients and their families will become a force reshaping the market. Patients usually follow the recommendations of their doctors. And people pick doctors by reputation, by word of mouth or from the lists of physicians who contract with their insurers.

The issue of health care price transparency started attracting more attention under the Obama administration, as then-HHS Secretary Kathleen Sebelius oversaw the disclosure of list prices charged by hospitals. The Trump administration’s initiative drills down more deeply to try to get at the prices actually paid by insurers.

Many policy experts believe that high prices are a major driver of the nation’s chronic affordability problems with health care, which accounts for about 18% of the total economy, significantly burdening families, taxpayers and businesses.