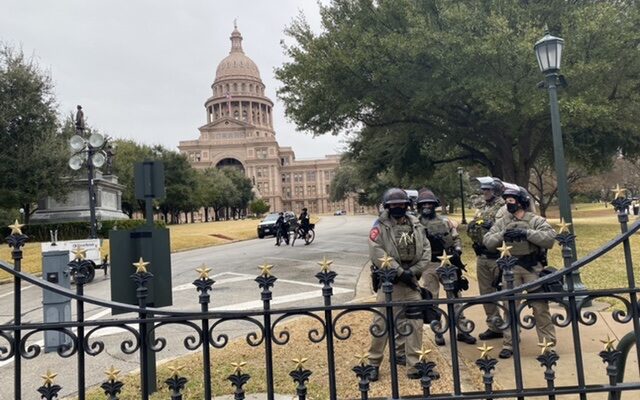 Thomas Jones from Crockett, Texas blames the “social media blackout” for the small turnout. His Facebook account has been deactivated until January 23.

“I thought there would be more people,” said Jones. “We didn’t know because of the Facebook blackout and the total censorship of any conservatives.”

“I don’t know why some people believe that censorship is good. One day, they’ll censor you,” Jones told KTSA News.

Jones and a friend, Trisha O’Grady from Colorado, held a large banner that read, “Socialism is Slavery.”

“I’m a 22-year Air Force Veteran and I’m here because I don’t think the election was fair,” said O’Grady. I think the courts should be compelled to hear the evidence in those contested states.”

Norma Luna and her sister are Biden supporters who drove drove to Austin from Killeen. They watched the inauguration on a cell phone outside the gates to the Capitol grounds.  They clapped and cheered, and at times, Norma wiped away tears of joy.

“This is such a special day. We have the first female minority Vice President ” said Norma. “We wanted to embrace the moment and maybe embrace people from the other side so that we can come together in unity.”

Her sister, Sylvia Luna, said they wanted to be at the Texas Capitol because “it’s a symbol of democracy.” Both are teachers who took the day off. They weren’t disappointed that the Capitol grounds were closed and the place was surrounded by tecas Department of Public Safety officers and Texas  National Guardsmen.

“I think that it’s important because of what happened at the U.S. Capitol two weeks ago,” said Sylvia. “We understand why they have extra security and it makes us feel safe.”

Jacob K showed up on Wednesday wearing a hat with the words,”Trump That.” He’s not ready to call Joe Biden President.

“No, not really. If they can go four years saying,‘that’s not my President, ‘ so can I,” he said.

There were no groups of armed protesters at the Texas Capitol as there were on Sunday and last week.

A man wearing a cowboy hat stood outside the gates on 11th street at Congress Avenue, faced the Capitol building and blew a shofar for several minutes. He identified himself as a Texan and said he had no party affiliation. He said he sounded the shofar to call for a revival.

“It’s time for this world and this nation to repent,” said the man. “The kingdom of God is at hand and people need to come back to God.”

Shofar is the Hebrew word for trumpet.  It’s made from a Ram or Kudu horn and is used at Jewish celebrations.  The mystery man at the Capitol said he’s not Jewish and he got the shofar for Christmas.  In addition to the Texas Capitol, he has sounded the horn outside the Governor’s Mansion, 6th street, media outlets, banks, and a federal courthouse.