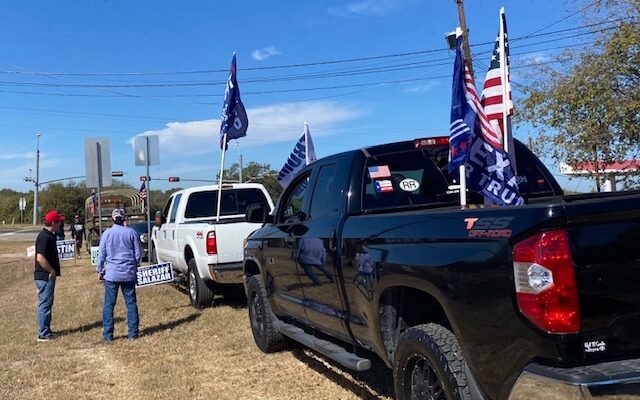 SAN ANTONIO (KTSA News) – About a dozen Trump Train participants gathered outside the voting location at  Southside High School Tuesday morning.  Jacinto Martinez was leading the way in a military-style truck adorned with a Trump flags.  He was wearing a shirt that read,”Homies for Trump.”

He told KTSA News that President Trump has more support among Hispanics than you might think.

“I’ve seen a very big turnout at these events,” Martinez said.  “I think it’s a silent majority and they’re going to come out today and vote for Trump.”

Silvestre Martinez believes Hispanic support for Trump has grown “because they want jobs, and he’s done a great job with the economy.”

Some participants in the Trump Train stood outside the fence around the voting poll parking lot and handed out flyers and bumper stickers.   A Texas DPS  trooper and the Southside ISD police chief stood several hundred feet away, keeping an eye on the activities and the voting poll.