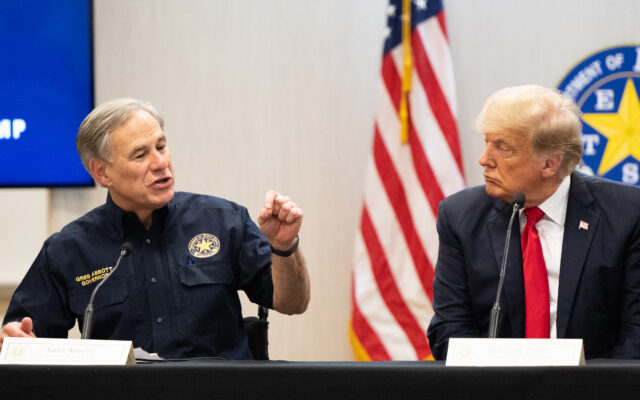 Photo by Brandon Bell/Getty Images - Texas Gov. Greg Abbott addresses former President Donald Trump during a border security briefing on June 30, 2021 in Weslaco, Texas. Gov. Abbott has pledged to build a state-funded border wall between Texas and Mexico as a surge of mostly Central American immigrants crossing into the United States has challenged U.S. immigration agencies. So far in 2021, U.S. Border Patrol agents have apprehended more than 900,000 immigrants crossing into the United States on the southern border.

Abbott and Trump both made claims the chaos at the border coincides with the election and installation of the Biden Administration in January.

“It is a far more dangerous situation than there’s ever been,” Abbott said. “The people of Texas had been pleading for us to be able to step up and help restore safety and security in their lives and that is exactly why Texas is stepping up and doing a hob that is truly the federal government’s job — a job that you did, but a job the Biden Administration is completely failing us on.”

Local and state law enforcement have been mobilized to the U.S. Border in Texas in higher numbers since Operation Lonestar was launched in March and has recently been assisted by a number of states including Florida, Nebraska, South Dakota, Iowa, Arkansas, and Georgia.

Sheriffs from Brooks and Tarrant County weighed in on how border insecurity has had cascading effects across the state over the last year.

Director at the Texas Department of Public Safety Steve McCraw said Texas has a storied history of drug trafficking along the 1,254 mile long border with Mexico.

“It is transformed [from] Mexican drug trafficking organizations that were relatively benign and focused on marijuana in the 80’s to the most dangerous, ruthless, vicious and depraved organizations in the world and on our front door.”

McCraw cited there has been a 500% increase in the apprehension of illegal immigrants intending to do harm to the country or its occupants from May 2020 to May 2021.

McCraw said that because of the enforcement at the border, cartels are operating similar to a military force with a command and control system that includes logistics, intelligence, information operations and using deadly force. The cartels are also reportedly recruiting American and Mexican children and forming partnerships with dangerous gangs in both Texas and across the country. McCraw said six cartels and 16 gangs operate criminal enterprises along the border in Texas.

“If you have a drug problem anywhere in the country, you have a border problem,” McCraw said. “If it’s cocaine, methamphetamines, fentanyl and heroin, the Mexican Cartel owns it, plain and simple.”

Abbott said today that DPS officials have seen a 2000% increase in fentanyl confiscated at the border compared to last year.

Trump made claims that during his administration, that fentanyl being smuggled into the country “was almost a non-issue” and that “we stopped human trafficking, mostly in women” after almost 500 miles of the border wall was constructed.

Tarrant County Sheriff Bill Waybourn said that one year ago, fentanyl “was barely on our radar,” but today even low-level dealers are moving high quantities of the drug disguised as prescription drugs.

Waybourn said Tarrant County is a hub for cartel members through information received from embedded law enforcement agents in cartel operations. He cited that drug overdoses are up 50% this year and 16 to 24-year-olds are seeing the most casualties.

Sheriff Urbino “Benny” Martinez oversees one of the busiest border checkpoints in Brooks County and said there is an increase in bodies being found. Martinez said four bodies were recovered in June 2020 and that number is up to 16 bodies so far this month.

Martinez said that in Brooks County alone, law enforcement has seen nearly fives times as many 9-1-1 calls, a three-fold increase in rescues and two times as many apprehensions.

Two individuals who were arrested yesterday in the bust of stash house along the border who tested positive for COVID-19, Martinez said, indicating illegal immigrants may also pose a threat to public safety.

During remarks in front of the border wall, the former president said returning to Trump Era border security protocols will be no easy thing over reported negotiations with the Mexican President lapsing, including the reported return of MS 13 gang members to their home countries.