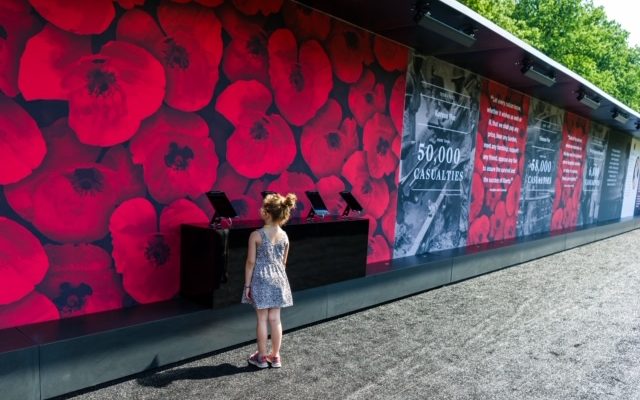 Girl visits The Poppy Memorial, a temporary memorial made by USAA consisting of more than 645,000 poppy flowers, with each flower honoring a fallen military servicemember since World War I, is seen at the National Mall on May 25, 2018 in Washington, D.C. (Photo by Rodney Choice/AP Images for USAA)

The great standard, “Autumn Leaves”, referencd in the headline has a strange, cool history. It was French in origin, had no lyrics at first, and was less-appealingly titled “Dead Leaves”. Johnny Mercer made it so much better by penning those beautiful lyrics, and it’s worked for singers from Nat King Cole to Frank Sinatra to Ahmad Jamal to Keith Jarrett.

“Three Doors to Death” by Rex Stout (1950) A trilogy of short novellas featuring one of the all time great fictional detectives, Nero Wolfe and his wisecracking lieutenant, Archie Goodwin.

“Unexampled Courage: The Blinding of Sgt. Isaac Woodard and the Awakening of President Harry Truman…” by Richard Gergel (2019) When a black soldier is brutally beaten right after his WW2 discharge, his story—against the odds—changes the life and outlook of two other men. One is the aristocratic Southern judge who has his conscience torn, and the other is the President of the United States, who only thinks he knows segregation and Jim Crow. The author brings to life a little known moment in our history that changed it.

“Telegraph Avenue” by Michael Chabon (2012) Chabon is a flat-out brilliant creator of characters. Here, he introduces us to two unlikely business partners in a legendary Oakland record shop, their lives, wives, kids and trials.

“Judgement Days: LBJ, MLK and The Laws That Changed America” by Nick Kotz (2005) Watching the fascinating political realignments starting to happen this year drove me to explore this book about how Martin Luther King Jr. became, at times, a close and valued ally, and later, an embittered enemy of LBJ’s presidency and civil rights agenda. If you love American history, this and the above-mentioned “Unexampled Courage” are two absolute gems.

“Jimmy The Kid” by Donald Westlake (1974) Westlake was one of the most prolific mystery writers ever. Fifty or so years of one or more books per year. This is from his best-known “Dortmunder” series. A coffee klatch of hard-luck criminals plot a kidnapping—based on the plot of a pulp fiction novel.

“Zero” by Eric von Lustbader (1987) I’m a big fan of almost everything EVL writes (even his audacious takeover of the Jason Bourne character invented by the legendary Ludlum). “Zero” is just what the title says: a zero, While it resembles the plot and structure of his many enjoyable stories, it never quite works.

“Cat Chaser” by Elmore Leonard (1982) Like almost all of Leonard’s heroes, Moran is a guy who’s really not looking for trouble. But when it finds him, then, like almost all of Leonard’s heroes, he finds a quirky, unpredictable way to turn trouble to his purposes. The fact that almost everything in this book, set in the Florida drug/politics scene of the ’80s, is dated, makes it even more fun to read.

“The Screwtape Letters” by C.S. Lewis (1942) From an extraordinary writer and thinker, comes an even more extraordinary book. Lewis explains Christianity, morality and human temptation and frailty—by imagining letters written from a senior demon, or devil, to his more junior counterpart. They are working on destroying someone referred to as “the patient”. The patient, of course, is all of us.

“Liars and Thieves” by Stephen Coonts (2005) Best known for his Jake Grafton series, Coonts here is spinning off the character of CIA spy Tommy Carmellini. Here, the likeable Carmellini uncovers a plot reaching up the top of the American political system on the eve of an election.

“Iron River” by T. Jefferson Parker (2010) Of all the California-based mysteries Parker has written, his short Charlie Hood series is my favorite. Hood’s one of the best, most believable cops ever invented. Here, he’s on loan from the L.A. County Sheriff’s department to a federal ATF operation on the border with Mexico, called “Operation Blowdown”. “Iron River” isn’t a place—it’s the name given to the steady flow of illegal guns across the border and into the cartels.

“LAPD ’53” by James Ellroy (2015) The novelist best known for “L.A. Confidential”, “The Black Dahlia” and others might be, and in fact is, the perfect person to compile a short book of actual crime scene photos from the LAPD archives, and write ’em up in his usual strung-out hepcat style. You’ve never seen a book like this, and if Ellroy’s new to you, you will never read another author like him.

“The Heist” by Daniel Silva (2014) Israeli superspy Gabriel Allon lives under the cover of being a gifted art restorer, so it’s not surprise that many of Silva’s plots involve famous works of art intersecting with international terrorism. Silva’s a genius, Allon’s like a best friend you wish you could spend more time with, and as a bonus, you learn a little about the greatest painters of all time.

“The Unknowns” by Patrick O’Donnell (2018) The author leads us into, through and out of America’s history-changing involvement in World War I, and the almost unbelievable story of how and why the Tomb of the Unknown Soldier came to be.