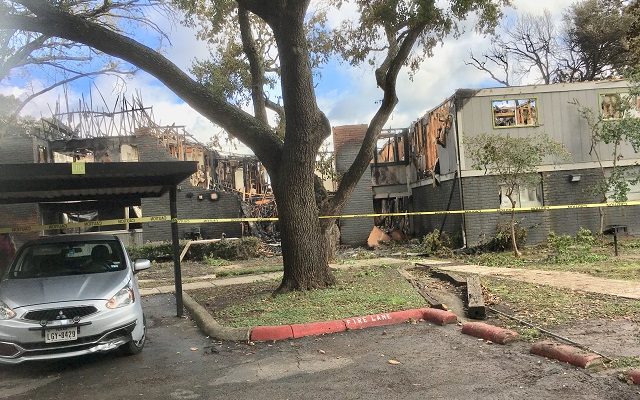 SAN ANTONIO (KTSA News) – It’s a heartbreaking scene as residents displaced by a North Side apartment fire near Churchill High School watch and wait, in hopes of being allowed to retrieve what’s left of their belongings. They’ve been warned to stay out because of the instability of the structure at Distinction Apartment Homes on Parliament near Blanco Road.

James Neil told KTSA News his smoke alarm didn’t go off, but fortunately, he woke up and smelled smoke around 10:30 Monday night.

“I ran outside and the second floor back building to the left had flames shooting about 10 feet out of the windows and the balcony, and at that point, I knew it was over,” he said.

As they tried to make their way to safety, he knocked on doors and yelled “fire.” The fire destroyed the roof and several apartments, leaving others with heavy smoke and water damage. There was so much water damage in Neil’s first-floor residence that he doubts anything is salvageable.

James Martinez says the fire was so intense, his wife tried to jump from their second-story balcony.

“That’s how hot it was. She tried to jump from the second floor,” he told KTSA News. Martinez held her back and helped her and his children escape unharmed, but all of their belongings are gone.

“I understand that things like this happen in life and we have to move forward and make the best out of it–as long as nobody lost their life,” he said.

Martinez says his neighbor is mourning the loss of his pet.

“Our neighbor’s dog didn’t make it. I know that’s devastating because the dog was like family to him,” said Martinez.

The cause of the fire remains undetermined because the instability of the structure makes it dangerous for investigators to do their job. Firefighters returned to the scene this morning when some hot spots flared up.

San Antonio Code Enforcement officers were taking photos and checking out the damage this morning as they try to determine how much of the building will have to be demolished.