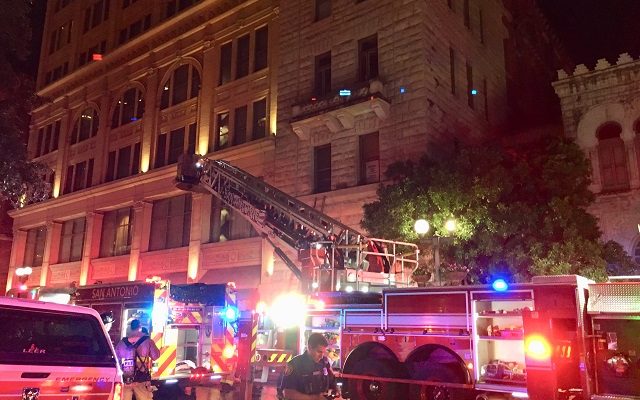 Woody Woodward with the San Antonio Fire Department says it started around 5 a.m. in the kitchen at Waxy O’Connor’s Irish Pub on the River Walk and spread to the adjacent Mokara Hotel and Spa.  The facade of the hotel is on Crockett Street between N. St. Mary’s and Navarro.

“The fire started in the kitchen and went up a vented hood and went up the vent through several floors of the hotel with a lot of smoke,” said Woodward.

Hotel General Manager John “Rusty” Wallace told KTSA News there were 63 guests and all evacuated safely.  They were transferred to the nearby La Mansion Hotel, which also is a property of Omni Hotels and Resorts.

Woodward says initially, there was some concern that a woman may have been overcome by smoke, but she was checked out by EMS and seemed to be okay.

Around 8:30 a.m., crews were called back to the hotel when the fire flared up again between the second and third floors, but that was quickly extinguished.

The smoke also spread to an office building next door which has some apartments on the top floor, but everyone evacuated safely, including a woman and her pets.

Woody Woodward with the San Antonio Fire Department says it started at Waxy O’Connor’s, which shares a wall with the Mokara, and traveled up an adjoining wall. He says there was some charring of some of the hotel rooms and firefighters remain on the scene, making sure the smoke doesn’t continue traveling up the 8-story hotel.

Displaced guests were taken to the nearby La Mansion Hotel, which also is an Omni property.