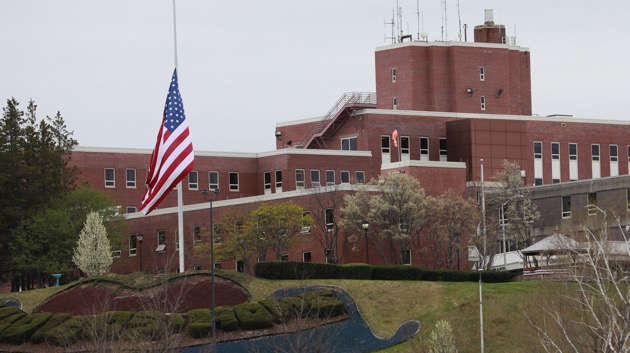 HOLYOKE, MA - APRIL 29: The flag flies at half mast outside the Holyoke Soldiers’ Home, a long-term care facility for veterans where 68 have died and dozens more have tested positive for the coronavirus, is pictured on April 29, 2020 in Holyoke, Massachusetts. (Photo by Matthew Cavanaugh/Getty Images)

(HOLYOKE, Mass.) — Two former leaders of the Holyoke Soldiers’ Home in Massachusetts have been indicted in connection with the COVID-19 deaths of nearly a dozen veterans, Attorney General Maura Healey announced Friday.

Former Superintendent Bennett Walsh and former Medical Director Dr. David Clinton each have been charged with criminal neglect following an investigation into the facility, where at least 76 residents died of COVID-19.

“This was an outbreak at the home that we know claimed at least 76 lives … the lives of veterans who served our country bravely and with honor. They risked their lives from the beaches of Normandy to the jungles of Vietnam, and to know that they died under the most horrific circumstances is truly shocking,” Healey said.

Healey alleged that Walsh and Clinton were “ultimately responsible for the decision on March 27 that led to tragic and deadly results,” of combining the 42 veterans into a single unit that usually accommodates 25 beds. Six or seven veterans were placed in rooms meant to hold only four people. Because of overcrowding, nine beds also were placed in a dining room.

“While this criminal indictment cannot bring back their loved ones, I do hope, sincerely, that it provides those affected by this tragedy some solace that we are doing everything we can to hold accountable the individuals who we believe are responsible here,” Healey said.

In a statement, an attorney for Walsh wrote that “the Attorney General is blaming the effects of a deadly virus that our state and federal governments have not been able to stop on Bennett Walsh. He, like other nursing home administrators throughout the Commonwealth and nation could not prevent the virus from coming to the Home or stop its spread once it arrived there. At all times, Mr. Walsh relied on the medical professionals to do what was best for the veterans given the tragic circumstances of a virus in a home with veterans in close quarters, severe staffing shortages and the lack of outside help from state officials.”

An attorney for Walsh told ABC News he intends to plead not guilty and to vigorously defend himself against the allegations. An attorney for Clinton didn’t immediately respond to a request for comment from ABC News.

Over 90 families of Holyoke Soldiers’ Home veterans have been consulted and interviewed as a part of the investigation.

The attorney general’s report is the second of four investigations into failures at the facility. Earlier this summer, an investigation lead by former federal prosecutor Mark Pearlstein also found that the facility’s leadership team made substantial errors in responding to the outbreak.

Healey confirmed that her office is actively investigating several other facilities that suffered high numbers of coronavirus-related deaths. Since the beginning of the pandemic, over 6,000 probable or confirmed deaths have been reported in long-term care facilities in Massachusetts — approximately two-thirds of the state’s total reported death count.