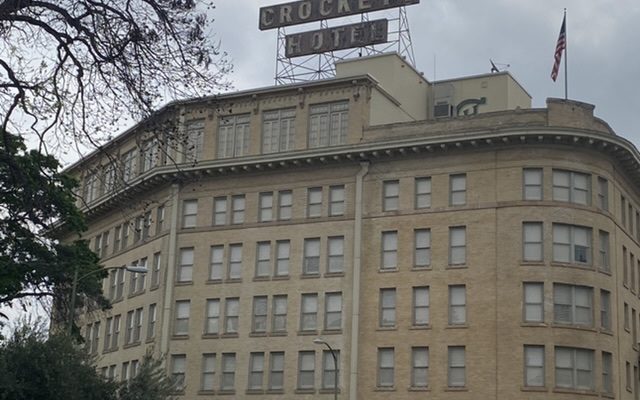 SAN ANTONIO (KTSA News) -Two historic hotels in downtown San Antonio, the Crockett and the St. Anthony, have temporarily shut down because of the coronavirus pandemic.

Bill Brendel, manager of the Crockett Hotel, says he’s never seen anything like this.

“I’ve been in this business for 30 years and I’ve opened a couple of hotels, but I’ve never had to go the other direction and close one,” Brendel said.

He told KTSA News they’ve had one cancellation after another during the last few weeks as the COVID -19 crisis continues.

“We tried to make some initial cuts in staff and expenses, but it wasn’t enough,” he said.

Brendel says they’ll try to keep benefits going as long as possible  for their furloughed employees, and he’s  hoping to reopen the landmark hotel on Bonham Street behind the Alamo in early May.

“We’re not going anywhere. This hotel has been here since 1909 and we’ll reopen when things get better,” he said.

“We are all facing a temporary new reality amidst the COVID-19 crisis that has impacted virtually all commerce and daily life in the United States,” said Libby Nations, spokeswoman for the St. Anthony Hotel. “This crisis and the various travel and gathering restrictions that have been implemented in San Antonio and around the country has precipitated a sudden, profound decline of activity in our marketplace. “

The St. Anthony is scheduled to reopen May 31.

“We will see you again soon.” Nations said in a press release. “We wish you good health.”

The Hyatt Regency and the Grand Hyatt closed last week, and others are expected to suspend operations as the tourism and travel industries take a big hit.