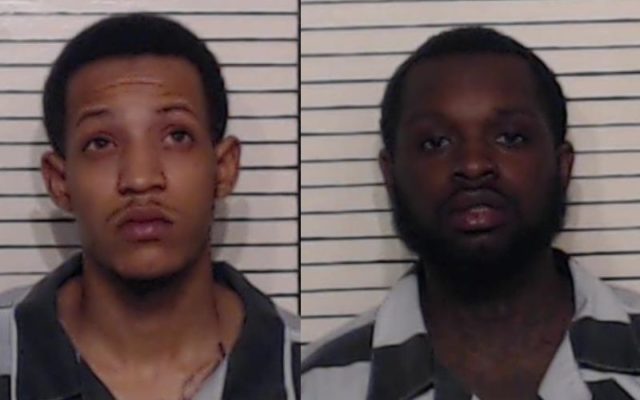 New Braunfels police said it got a call at around 7:30 a.m. to the Bluebonnet Dodge overflow parking lot on South Business 35 when a witness saw three Dodge Durangos being stolen from the lot.

A New Braunfels officer spotted all three traveling north on Interstate 35 and all three ignored the officer’s attempt to have them stop.

One of the drivers was able to get away when it suddenly turned off the interstate just north of Watson Lane while the other two continued into San Marcos.

One SUV, driven by 24-year-old Donte Williams of Missouri City, turned right onto Wonder World Drive, cut through a field and crashed through a privacy fence at the Palazzo Apartments.  Williams got out and tried to run, but was quickly caught by San Marcos police officers.  Those officers found he was carrying a loaded .38 caliber revolver.

The other SUV, driven by 22-year-old Timothy Thompson of Houston, didn’t get as far.  Once he exited the freeway, police say he careened onto the grass median near Chick-fil-A.  Thompson also tried running away, but was also caught by police.

Williams and Thompson are now facing charges in both cities for their crimes.

Williams was charged in New Braunfels with unauthorized use of a motor vehicle, evading arrest in a vehicle, unlawfully carrying a weapon and had two felony warrants out of Harris County for aggravated robbery and aggravated kidnapping.  He is additionally facing evading by motor vehicle and evading on foot charges in San Marcos.

Thompson was charged in New Braunfels with unauthorized use of a motor vehicle, evading arrest in a vehicle and possessing marijuana.  He will also be charged with evading by motor vehicle and evading on foot charges in San Marcos.

All three SUV were taken back to New Braunfels to be processed by police.  The police department said the investigation is ongoing and more arrests and/or charges may follow.