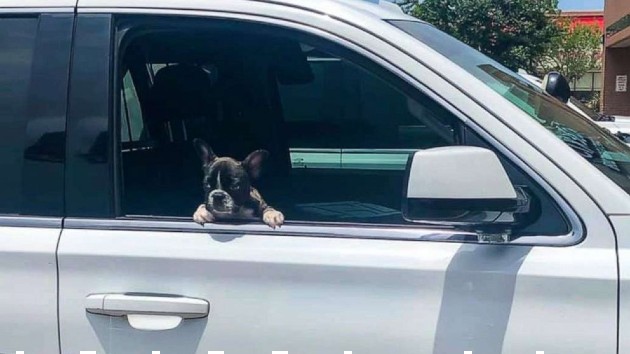 (HOUSTON) — Two women have been arrested for allegedly stealing a 14-week-old French bulldog puppy worth thousands of dollars from a Texas pet store.

The alleged theft occurred at approximately 12:25 p.m. at the Petland Woodlands store in Shenandoah, about 30 miles north of Houston. Local police received a call from the pet store saying that two women had just run out of the establishment with a puppy, according to a report from ABC News’ Houston station KTRK-TV.

“[The two women] asked to see a French bulldog, which we allowed them to see per our protocol, and they immediately took the dog and ran out the door,” Petland Woodlands manager Andrew Jones told KTRK. “Our employees went outside to get a description of the vehicle.”

Jones said his employees immediately called 911 and that authorities found the two women near the Woodlands Mall, attempting to reattach the license plates onto a silver Chrysler PT Cruiser that they allegedly fled the scene of the crime in.

Both women were taken into custody on July 5, shortly after the incident. It was unclear what charges they face.

The puppy, named Mario, who is worth an estimated $10,000, was returned to the pet store, where he is doing well and receiving a lot of attention, according to Jones.

Jones said it’s not the first time that this kind of theft has been attempted at one of his stores.

“This happens more often than we would like to say,” he told KTRK. “French bulldogs are very highly sought after and, as a result, it is what people are attempting to steal.”

Jones said his business has procedures in place to prevent such burglaries, including a security system with 36 different cameras and additional staff members on the clock.

The store also asks for proof of identity if someone expresses interest in buying a puppy but does not require ID just to play with the dogs because it is important for the animals to get as much play time as possible, according to Jones, who said he will be evaluating if this is the safest and most secure procedure.

“We are relieved that Mario was safely returned to his Petland family and that he is unharmed,” he told KTRK. “Our thanks to the dedicated men and women of the Shenandoah Police Department for responding immediately and helping us bring Mario home.”