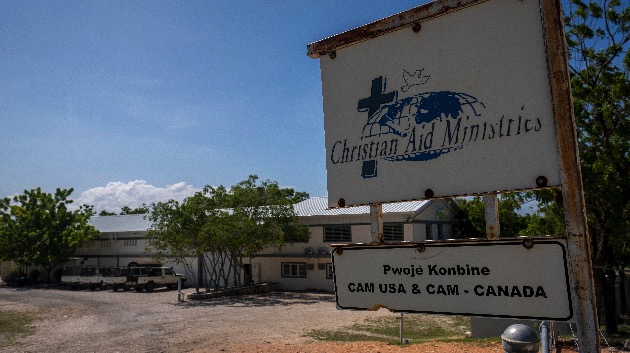 A sign stands outside the Christian Aid Ministries in Titanyen, Haiti, on October 22, 2021. - The leader of a Haitian gang who kidnapped a group of North Americans over the weekend has threatened to execute them, according to video seen by AFP. The footage shot October 20, 2021 but released Thursday on social media showed Wilson Joseph, wearing a suit and surrounded by armed men, in front of coffins containing the bodies of five members of his gang. (Photo by Ricardo ARDUENGO / AFP) (Photo by RICARDO ARDUENGO/AFP via Getty Images)

(NEW YORK) — Two of the Christian missionaries who were kidnapped in Haiti last month have been released, according to the ministry.

Nineteen people — including 17 missionaries, five of them children — were kidnapped by a Haitian gang on Oct. 16 during an airport run, a source at the U.S. embassy told ABC News last month.

The Ohio-based ministry the missionaries are affiliated with, Christian Aid Ministries, announced in a statement Sunday that two of the hostages have been released and “are safe, in good spirits, and being cared for.”

“We welcome reports that two individuals held hostage in Haiti have been released. We do not have further comment at this time,” a White House official told ABC News.

The Haitian National Police also confirmed the release of the two hostages to ABC News.

The ministry could not provide the names of those released, the reasons for their release or their current location, according to the statement. Further details about the remaining hostages were not provided.

“We encourage you to continue to pray for the full resolution of this situation,” the statement read. “While we rejoice at this release, our hearts are with the fifteen people who are still being held. Continue to lift up the remaining hostages before the Lord.”

The Haitian government suspects the gang known as 400 Mawozo to be responsible for the abductions, the source at the U.S. embassy said last month. The FBI made contact with the 400 Mawozoa on Oct. 18 and was assisting in negotiations, the agency told ABC News.

The group, which included 16 Americans and one Canadian, was abducted while on a trip to an orphanage, according to the ministry.

The country is experiencing a rise in gang-related kidnappings, many demanding ransom, which stalled after the assassination of President Jovenel Moïse on July 7 and a 7.2-magnitude earthquake on Aug. 14 that killed more than 2,200 people.

The U.S. State Department issued a warning in August about the risk of kidnapping for ransom in Haiti.