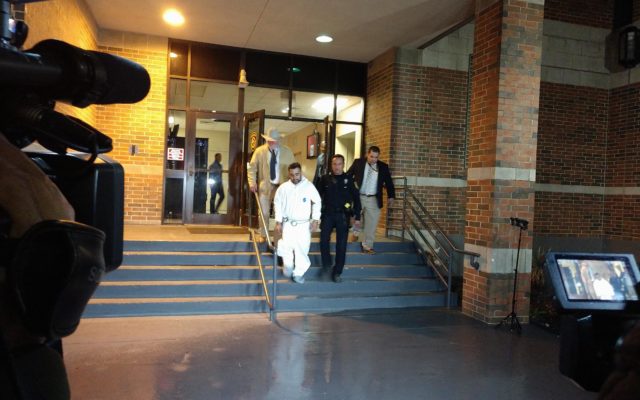 Murder suspect Michael Morales is walked out of the Bexar County Sheriff's Office after confessing to two murders on Feb. 11, 2020. (Photo: KTSA/Dennis Foley)

Morales was arrested after fatally shooting his common law wife Tuesday.  The sheriff’s office said he confessed to both killings.

Salazar said Morales went to a home on Sandy Circle some time between 11 p.m. and midnight Monday to collect a marijuana drug debt.

Morales and the 37-year-old victim got into an argument, which became physical.

“It was absolutely a very violent struggle that happened between these two,” Salazar explained.

Appliances were moved during it and water pipes were broken.  It moved out into the backyard where Morales pulled out a screwdriver and stabbed the victim with it — killing him.

Morales went to an area hospital to be treated for his wounds and then went home.

While the sheriff’s office was investigating the first scene, Morales and his 45-year-old common law wife got into a heated argument over the fact he killed someone.

Morales told deputies he and this second victim got into a physical fight before we shot her with his deer rifle.  Salazar said investigators believe he simply got his rifle and shot her without a physical struggle.

Salazar said that while violent crime is down in the unincorporated areas of Bexar County, there have been significant increases in family violence deaths and drug related homicides.

“Clearly, the drug trade is not a victim-less crime,” the sheriff stated.  “Clearly, things escalate and get out of hand.  Clearly, a gentleman lost his life.  And, yeah, he was absolutely involved in the drug trade.  But his six-year-old found him murdered in the backyard today.  That’s not a victimless crime.  That little girl or little boy is going to be dealing with the aftereffects of what he or she is seeing for the rest of their life.”

Sheriff Javier Salazar said the first murder happened sometime overnight in the 1900 block of Sandy Circle, which is near U.S. 281 south of San Antonio.

Family members went to visit the home of a 37-year-old man when a six-year-old relative found the victim’s body in the backyard.  The sheriff said it was not clear whether the man had been shot or stabbed.  Detectives are currently looking for any leads to help find out what happened and who may have committed the murder.

In that case, Salazar said a different 37-year-old man and a 45-year-old woman who have some sort of relationship had a disagreement.  It is not clear what that disagreement was about, but it escalated to the man shooting the woman multiple times.

The man left the scene after the shooting.  A third person, who Salazar said was the daughter of either the man or the woman, called the sheriff’s office.  Responding deputies found the victim dead.

The sheriff’s office was able to find the man, who it did not identify, a short time later and took him into custody.

Salazar said there had been an ongoing domestic issue, including one incident the night before that resulted in an injury to the suspect.

The man is expected to face at least a murder charge in that case.