Two oil tankers attacked near the Strait of Hormuz 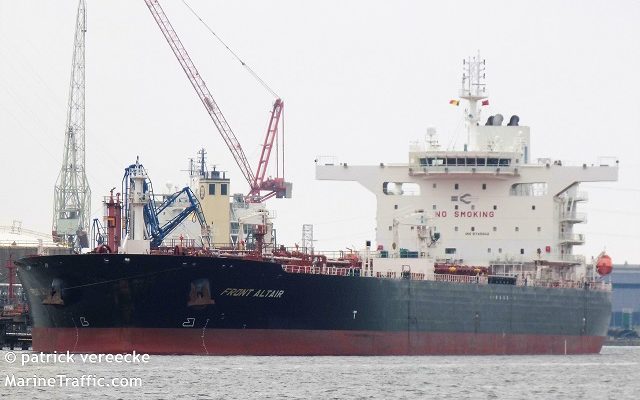 This May 2018 image made available by Marine Traffic shows the MT Front Altair in Antwerp, Belgium. Two oil tankers near the strategic Strait of Hormuz were reportedly attacked on Thursday June 13, 2019. International Tanker Management, which operates the MT Front Altair, said an explosion caused fire aboard but that the incident is still being investigated. (Patrick Vereecke/Marine Traffic via AP)

A South Korean company confirms that all the 23 crew aboard one of the two oil tankers reportedly attacked near the Strait of Hormuz have been rescued by one of its cargo vessels sailing in the area.

The Seoul-based Hyundai Merchant Marine Co. on Thursday cited crew of its Hyundai Dubai cargo vessel as saying that there were three rounds of explosion sounds at the MT Front Altair before it sent an emergency distress call.

The company says it’s the operator of the Hyundai Dubai vessel.

A company statement says the 3,000-ton Hyundai Dubai vessel sent a lifeboat to rescue MT Front Altair’s 23 crew members before embarking them on the cargo vessel.

It says the Hyundai Dubai vessel later handed over the rescued crew members to an Iranian rescue boat.

It says the MT Front Altair, built in 2016, had reportedly been on its way to Japan with naphtha, a petrochemical product.

The Iranian foreign minister has described the reported attack on oil tankers near the Strait of Hormuz as suspicious, since it occurred during a meeting between Japan’s prime minister and Iran’s supreme leader.

Mohammad Javad Zarif made the comment in a tweet on Thursday: “Suspicious doesn’t begin to describe what likely transpired this morning.”

Zarif described the talks between Shinzo Abe and Ayatollah Ali Khamenei as “extensive and friendly.”

However, Khamenei said Iran would never negotiate with the U.S. and said that while his country didn’t seek nuclear weapons, “America could not do anything” to stop Iran if it did.

The Japan Shipowners’ Association said one of the two ships attacked is a Panamanian-registered chemical tanker belonging to its Japanese member and was on its way to Singapore and Thailand, not to Japan.

It said all 21 Filipino crewmembers were uninjured.

The attacks came as Japanese Prime Minister Shinzo Abe was wrapping up a two-day trip to Iran with a mission to ease tensions between Tehran and Washington.

No one has claimed responsibility or explained how the tankers were attacked.

Iran’s Supreme Leader Ayatollah Ali Khameneni says that while Tehran doesn’t want an atomic bomb, “America could not do anything” to stop Iran if it did.

Khamenei made the comment on Thursday during a meeting with Japanese Prime Minister Shinzo Abe, who came to Tehran as an interlocutor for President Donald Trump to ease tensions between Washington and Tehran.

His visit may not have succeeded, however. Khamenei earlier was quoted as saying Iran “will in no way repeat” negotiations with the U.S. amid tension over its unraveling nuclear deal with world powers.

Khamenei’s official website quoted him as telling Abe: “I don’t regard Trump as deserving any exchange of messages and have no response for him and will give no response.”

DUBAI, United Arab Emirates (AP) — Two oil tankers in the Gulf of Oman, near the strategic Strait of Hormuz, were reportedly attacked on Thursday, the U.S. Navy said, with one adrift and on fire amid heightened tensions between Washington and Tehran and a high-stakes visit by the Japanese prime minister to Iran.

Benchmark Brent crude spiked 4% in trading following the reported attack, to over $62 a barrel, according to early market figures Thursday.

The latest incident comes after the U.S. alleged that Iran used mines to attack four oil tankers off the nearby Emirati port of Fujairah last month. Iran has denied being involved, but it comes as Iranian-backed rebels in Yemen also have launched missile and drone attacks on Saudi Arabia.

Cmdr. Joshua Frey, a 5th Fleet spokesman, said the U.S. Navy was assisting the two vessels. He did not say how the ships were attacked or who was suspected of being behind the assault.

Dryad Global, a maritime intelligence firm, preliminarily identified one of the vessels involved as the MT Front Altair, a Marshall Islands-flagged crude oil tanker. The vessel was “on fire and adrift,” Dryad added. It did not offer a cause for the incident or mention the second ship.

Iranian state television’s website, citing the pro-Iran Lebanese satellite news channel Al-Mayadeen, said two oil tankers had been targeted in the Gulf of Oman. It offered no evidence to support the claim.

Officials in the United Arab Emirates declined to immediately comment. The United Kingdom Maritime Trade Operations, a maritime safety group run by the British navy, first put out the alert early Thursday, giving coordinates for the incident some 45 kilometers (25 miles) off the Iranian coastline.

The timing of Thursday’s reported attack was especially sensitive as Japanese Prime Minister Shinzo Abe was visiting Iran on a high-stakes diplomacy mission. On Wednesday, after talks with Iranian President Hassan Rouhani, Abe warned that any “accidental conflict” that could be sparked amid the heightened U.S.-Iran tensions must be avoided.

Abe met with Iran’s Supreme Leader Ayatollah Ali Khamenei on Thursday, the second and final day of his visit. There were no immediate details about what they discussed.

Meanwhile, in Tokyo, Japan’s Chief Cabinet Secretary Yoshihide Suga, a top government spokesman, told reporters that Abe’s trip was intended to help de-escalate tensions in the Mideast — but not specifically mediate between Tehran and Washington.

His remarks were apparently meant to downplay and lower expectations amid uncertain prospects for Abe’s mission.

Tensions have escalated in the Mideast as Iran appears poised to break the 2015 nuclear deal with world powers, an accord that the Trump administration pulled out of last year.