Two teenagers will play each other in historic U.S. Open final 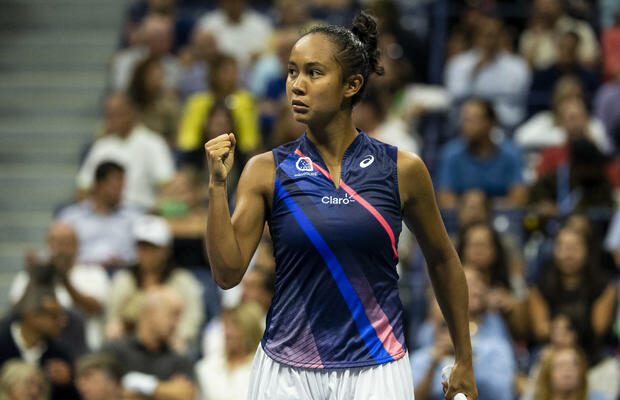 Leylah Fernandez of Canada celebrates against Aryna Sabalenka of Belarus in the semifinals of the women's singles of the US Open at the USTA Billie Jean King National Tennis Center. FREY / Getty Images

Rising tennis stars Leylah Fernandez, 19, and Emma Raducanu, 18, will be making history when they face off in the U.S. Open final in New York City on Saturday. After a string up shocking upsets, they will be the first teens to compete in a major final since the 1999 U.S. Open when Serena Williams beat Martina Hingis.

Fernandez, who was ranked No. 73 before the tournament, had a slew of impressive victories over higher-ranked opponents and some former U.S. Open champs. The Canadian youngster fended off Naomi Osaka (No. 3),  Elina Svitolina (No. 5) and Angelique Kerber (No. 17). On Thursday, she defeated Aryna Sabalenka (No. 2) in the semifinals.

During a post-match press conference, Fernandez described her improbable tournament run as “magical” and said doubters have fueled her since she was an adolescent. She acknowledged the sacrifices made by her mother to support her athletic career and her father, a former Ecuadorian soccer player, for coaching her, despite knowing very little of the sport.

“Impossible is nothing,” she said. “Like my dad would tell me all the time, ‘there’s no limit to my potential to what I can do. Every day we just got to keep working hard, we got to keep going for it.”

Raducanu, her British foe, also faced a difficult path into the final match, which will be the first time she’s competing for any major title on the WTA Tour. Raducanu, ranked No. 150 in the world, had to play in qualifiers to enter the main draw in the U.S. Open and took down two players ranked in the top 20 –  Belinda Bencic (No. 12) and Maria Sakkari (No. 17).

After beating Sakkari in Thursday’s semifinal, she told reporters that it’s been a “surprise” to be where she is now.

“Honestly I just can’t believe it,” she said. “A shock. Crazy. All of the above. But, yeah, it means a lot to be here in this situation…To be in a Grand Slam final at this stage of my career, yeah, I have no words.”

Raducanu is the youngest Grand Slam finalist since Maria Sharapova won Wimbledon in 2004. If she wins on Saturday, she would be the first British woman to win a major since Virginia Wade won in 1977.

Both players have received heightened interest for the different communities they represent. Raducanu’s mother is Chinese and her father is Romanian. The Toronto-born Raducanu said she drew inspiration from Chinese star Li Na and credited her mother for instilling hard work and discipline.

Fernandez has Filipino heritage from her mother and her father is from Ecuador. That nation’s president, Guillermo Lasso,  wished Fernandez well in a tweet earlier this week. Fernandez expressed gratitude to Filipinos abroad after learning they’re tuning in to watch her play.

“I’m so happy to hear that everyone in the Philippines is cheering for me and supporting me. So thank you,” she said Thursday.