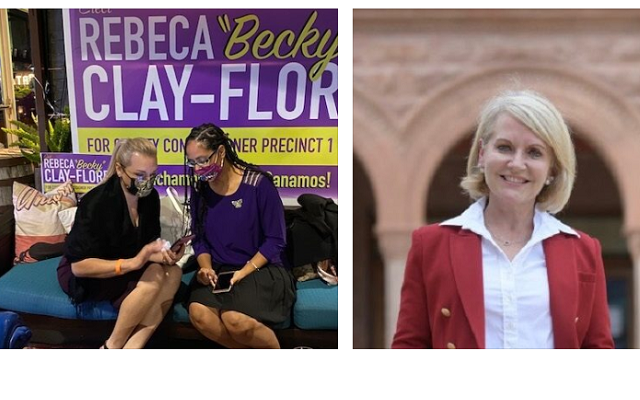 SAN ANTONIO (KTSA News) – Only two women have ever served as Bexar County Commissioners, but after Tuesday elections, two of the five seats will be occupied by women.

Republican Trish DeBerry will take over the Bexar County Commissioner Precinct 3 office being vacated by Kevin Wolff.   She defeated Democrat Christine Hortick Tuesday with  more than 54 percent of the votes.

Wolff, the lone Republican on commissioners court, decided not to seek re-election.

DeBerry is no newcomer to politics.  The former KENS-TV news anchor and reporter has worked on  campaigns.  She ran for mayor in 2009, but lost to Julian Castro.

Rebeca Clay-Flores will take over the Precinct 1 seat after defeating Gabriel Lara Tuesday.  She graduated from Brackenridge High School, and has an undergraduate degree from Princeton University and a Master’s from Harvard.

“I was pretty disgusted when I realized several years ago that in 100 years,  there have only been two women (on commissioners court)  and there’s never been a woman of color,” said Clay-Flores, who’s half Black and half Mexican American.

She’ll take over the office from the man she ousted in the Democratic Primary, Chico Rodriguez.

“Growing up here, I just felt that my community had been left behind and resources continue to go to other parts of town,” Clay-Flores told KTSA News.