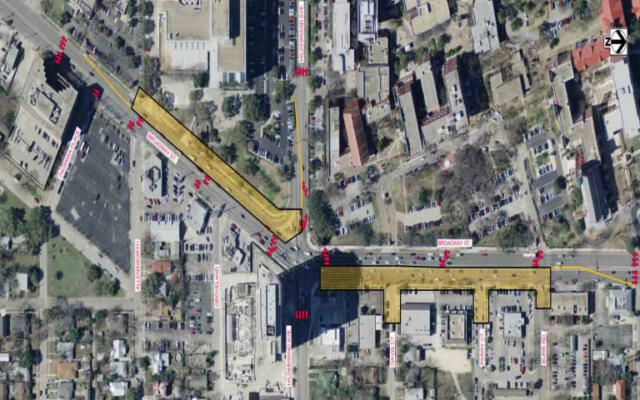 Image courtesy of the City of San Antonio

SAN ANTONIO (KTSA News) — The Texas Department of Transportation and the City of San Antonio are going head-to-head over an infrastructure project 7 years in the making.

The Texas Transportation Commission, TxDOT’s governing body, voted Thursday to rescind plans to sign over control of the Broadway Corridor to the city. The backtracking comes after two separate votes by TxDOT in 2014 and 2015 respectively.

The state transportation department said the hand-over for the 2.2 mile strip of Broadway between Burr Road and I-35 was never finalized. The change of ownership to the city was contingent on a project acceptance letter from TxDOT asserting the completion of the transfer — which was never penned or sent — because the city did not conduct the required environmental study.

City officials said this week they believed the transfer to have been completed in 2014 and the redevelopment has been underway with a portion of the corridor’s updates now completed.

The City of San Antonio, with the backing of voters in 2017, made plans to reduce the number of lanes from three to two in each direction to make way for bike lanes and wider sidewalks.

Texas Transportation Chairman Bruce Bugg, a San Antonio native, made the argument Thursday the city’s plan was a path to greater congestion on a major thoroughfare, which is counter to the Texas Clear Lanes Initiative started in 2015 by Governor Greg Abbott.

“What we’re trying to do is stay consistent with our congestion relief initiatives and not go backwards by reducing capacity,” Bugg said. “This action we’re contemplating has nothing to do with — against bike lanes or whatever — it has to do everything with maintaining capacity.”

Assistant City Manager Jeff Coyle told TxDOT on Thursday that there have been almost 500 crashes between vehicles and pedestrians along the corridor since 2014.

“We see Broadway as an urban safe street that can be transformed for all users including vehicles, transit, pedestrians and bikes,” Assistant City Engineer David MacBeth said. “Broadway serves its purpose as an urban highway, but a highway is no longer needed.”

San Antonio District Engineer Gina Gallegos said a TxDOT traffic study showed the project would cause congestion, which the city disagrees with.

MacBeth said Thursday that city officials “have not had the opportunity to sit down with [TxDOT] to clear up these misunderstandings.”

“We’re disappointed in the complete about-face by TxDOT after working with the City and stakeholders for the last six years,” Walsh said in a statement. “It’s not clear how the State will accomplish what the voters approved without reducing the current seven lanes of traffic, but we will stay focused on developing a path forward to deliver the project the community expects.”

TxDOT spokesperson Bob Kaufman issued a statement noting the department has plans to work with city officials and other local stakeholders to come up with some sort of solution.

At least 18 dead in Russian missile attack on Odesa building