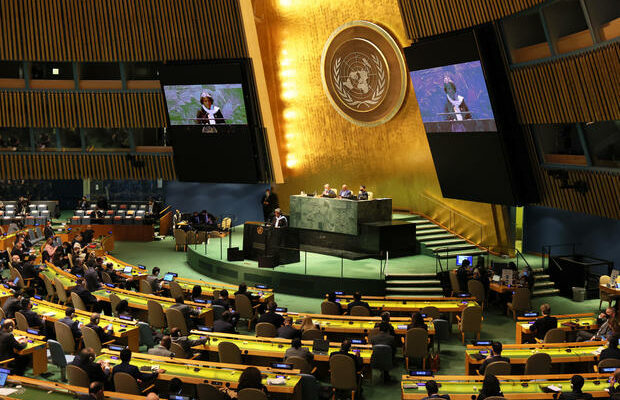 United Nations – The United Nations General Assembly voted overwhelmingly during an extraordinary emergency session on Wednesday to pass a resolution condemning Russia’s military action against Ukraine. The resolution — which passed with 141 votes in favor, 35 abstentions and just five votes against — demands that Russia “immediately cease its use of force against Ukraine.”

“Russia is preparing to increase the brutality of its campaign against Ukraine,” U.S. Ambassador to the U.N. Linda Thomas-Greenfield said before the vote. “We’ve seen videos of Russian forces moving exceptionally lethal weaponry into Ukraine, which has no place on the battlefield, that includes cluster munitions and vacuum bombs, which are banned under the Geneva convention.”

“The truth is that this war was one man’s choice and one man alone: President Putin. It was his choice to force hundreds of thousands of people to stuff their lives into backpacks and flee the country. To send newborn babies into makeshift bomb shelters. To make children with cancer huddle in hospital basements, interrupting their treatment, essentially sentencing them to death. Those were President Putin’s choices. Now it’s time for us to make ours,” Thomas-Greenfield said.

“The message of the General Assembly is loud and clear: End hostilities in Ukraine — now. Silence the guns — now. Open the door to dialogue and diplomacy — now,” U.N. Secretary-General Antonio Guterres told diplomats after the vote, adding: “The territorial integrity and sovereignty of Ukraine must be respected in line with the UN Charter.”

The U.S. Mission to the U.N. and Albania, the only eastern European nation on the Security Council, passed a procedural resolution to allow for Wednesday’s emergency session of the General Assembly — the first in 40 years and only the 11th in history. The U.S. then worked hard to ensure a convincing vote from the 193-nation General Assembly’s members.

Ukraine’s President Volodymyr Zelensky welcomed the vote, saying those who backed the Resolution had “chosen the right side of history.”

1/2 I praise the approval by the #UN GA with an unprecedented majority of votes of the resolution with a strong demand to Russia to immediately stop the treacherous attack on 🇺🇦. I’m grateful to everyone & every state that voted in favor. You have chosen the right side of history pic.twitter.com/1sb0qjxXKs

“The brazen and indiscriminate nature of Russia’s attacks has had devastating, horrific consequences for the entire country,” she added. “Russia has bombed residential apartment buildings. It has bombed sacred burial grounds. It has shelled kindergartens and orphanages and hospitals. Russia has spurred mass hunger and caused so many to flee their homes – the latest UN estimates are marching toward a million people.”