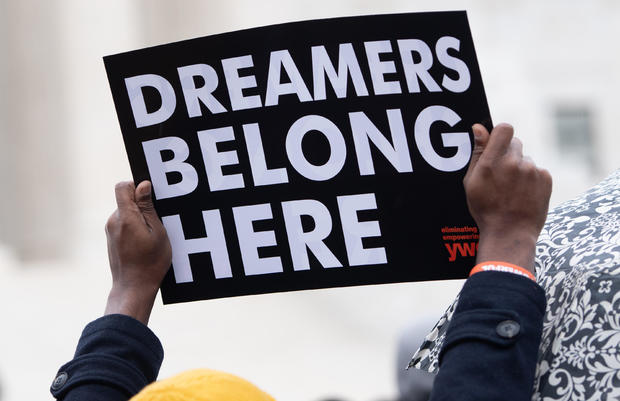 Immigration rights activists hold a rally in front of the Supreme Court in Washington, D.C., on November 12, 2019, as the court heard arguments about ending the Obama-era DACA program. SAUL LOEB/AFP via Getty Images

The Biden administration is assigning more immigration officers to review applications for the Deferred Action for Childhood Arrivals (DACA) deportation relief program in response to a soaring backlog of requests, according to information sent to Congress and shared with CBS News.

U.S. Citizenship and Immigration Services (USCIS) told Congress that it will also stage public awareness campaigns to educate prospective DACA applicants about how they can reduce processing times, and remind program beneficiaries to renew their work permits and deportation deferrals, congressional officials said.

As of May 31, USCIS had only adjudicated 1,900 of more than 62,000 first-time DACA applications submitted by undocumented immigrant teenagers and young adults since the program reopened in December 2020, according to government data shared with Congress.

By the end of June, the backlog of pending first-time DACA applications had jumped to over 81,000 petitions, a 48% increase from late March. Additionally, more than 13,000 DACA renewal requests remained under review beyond the 120-day adjudication goal.

The significant delays in the adjudication of applications has alarmed DACA recipients and first-time applicants, who fear the Obama-era program could be closed once again due to a looming federal court ruling. The state of Texas has asked a federal judge to immediately suspend the program or to shut it down completely over two years.

In a letter last week to Nevada Democratic Senator Catherine Cortez Masto, who had expressed concerns about the delays in DACA processing, USCIS interim director Tracy Renaud said the agency was “working hard to process applications in a timely manner.”

“However, we acknowledge that several factors have caused some DACA requests to be processed outside our stated processing time goals, including unexpected technical issues, training or retraining time, and delays for biometrics appointments,” Renaud wrote.

USCIS said it fixed a “technical problem” that had delayed the validation of government-issued “alien registration numbers” for DACA applicants. The agency said it also “shifted resources amid insufficient staffing levels due to fiscal challenges.”

Along with training and reassigning adjudicators, USCIS said it has expedited biometric gathering, which must generally be done in-person at agency offices for first-time DACA applications.

As of late last month, more than 33,000 first-time DACA applicants had completed their biometrics and nearly 11,000 had appointments scheduled. More than 37,000 petitioners were waiting to receive appointments.

“Biometric appointments were limited for a period of time due to necessary COVID-19 protocols,” the agency said in its correspondence with Congress. “However, those scheduling issues have largely been overcome and USCIS expects significantly more DACA initial requests to be completed as biometrics collections increase.”

USCIS also noted it is sending “many” first-time DACA petitioners requests for evidence to determine their eligibility. The prerequisites for DACA include having no serious criminal convictions, arriving in the U.S before the age 16, living in the country since at least 2007 and earning an American high school diploma, a GED or serving honorably in the military.

Cortez Masto, the Nevada Democrat, said she is committed to ensuring that USCIS allows DACA applicants to live and work in the U.S. without fear of potentially being deported. Nevada is home to more than 11,000 DACA beneficiaries, according to the latest USCIS data.

“I am pleased to see USCIS has taken action following our call to address DACA delays, and I am hopeful that their recent efforts, including training more officers on initial DACA applications, will help address the challenges facing our Dreamers,” Cortez Masto told CBS News. “Moving forward, USCIS must continue to prioritize speeding up their application processing, so Dreamers are not suffering the consequences of delays.”

The 616,000 immigrants enrolled in DACA are shielded from deportation and allowed to work legally in the U.S. Enrollment in the program, which must be renewed every two years, does not place beneficiaries on a pathway to U.S. citizenship.

In March, Democratic lawmakers in the House passed a bill that would allow DACA recipients and other undocumented immigrants who arrived in the U.S. as minors to apply for permanent legal status and eventually, citizenship. President Biden has promised to sign the proposal into law, but it is unclear if it will ever reach his desk, as it needs 10 Republican votes in the evenly split Senate.

In the meantime, the Biden administration has announced that it will be publishing a rule to codify the DACA policy into a federal regulation. Texas has argued in federal court that the Obama administration improperly enacted DACA through a memo, instead of a regulation that would be open to feedback from the public.

U.S. District Court Judge Andrew Hanen is set to issue a ruling imminently on that question and DACA’s broader legality. In a previous opinion, Hanen sided with Texas, finding that DACA is unlawful.