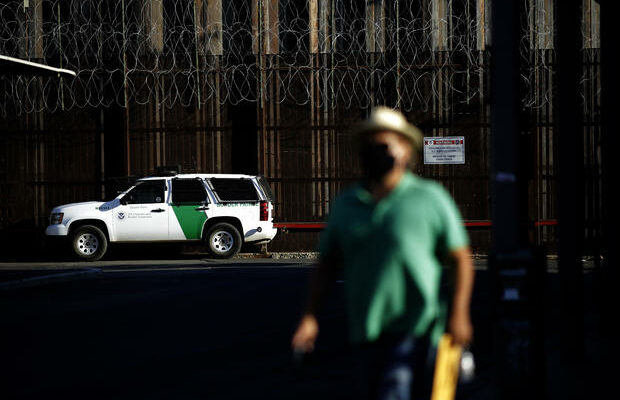 While it is a slight decrease from the 209,906 Border Patrol apprehensions recorded in March, April’s tally shows that migrant arrests along the border with Mexico remained at a 22-year high, according to historical agency data.

Moreover, the number of asylum-seekers processed by U.S. officials at ports of entry increased sharply in April, driven in part by record arrivals of Ukrainian refugees to the Tijuana-San Diego border.

The Office of Field Operations, the U.S. Customs and Border Protection (CBP) agency that oversees the country’s ports of entry, processed more than 30,000 migrants in April, including 22,257 near San Diego, a 234% spike from March, according to government data provided to a federal court this week.

That Office of Field Operations tally brought the total number of migrant encounters in April to 234,088, a nearly 6% increase from March. Migrant encounters do not always represent unique individuals because some migrants, especially single adults, are caught crossing the border unlawfully multiple times.

Nearly 97,000 of the migrant encounters in April led to expulsions under Title 42, the pandemic-era rules that allow U.S. border officials to rapidly expel migrants to Mexico or their home countries without processing their asylum claims.

In early April, the Centers for Disease Control and Prevention (CDC) announced it would stop authorizing Title 42, a public health law first invoked by the Trump administration. Citing improving pandemic conditions, the CDC said it would end the policy on May 23.

Since it was first instituted by the Trump administration in March 2020, Title 42 has allowed U.S. officials along the Mexican border to carry out over 1.9 million expulsions of migrants, the CBP data released this week show.

But a federal judge in Louisiana overseeing a lawsuit filed by a group of Republican attorneys general is expected to issue a ruling within the next week that could require the CDC to keep Title 42 in place, at least temporarily. U.S. Judge Robert Summerhays has already blocked border officials from starting to phase out Title 42.

Apprehensions of migrants along the U.S. southern border have reached record levels over the past year, fueled in part by soaring rates of repeat crossing attempts by some adult migrants trying to re-enter the U.S. after being expelled to Mexico under Title 42.

Biden administration officials have said they expect border apprehensions to ultimately decrease once Title 42 is lifted because U.S. authorities will be able to prosecute more repeat border crossers and deport more migrants under the expedited removal process, which includes a 5-year banishment from the U.S.

Expulsions under Title 42 do not carry similar penalties.

Nicole Sganga contributed to this report.