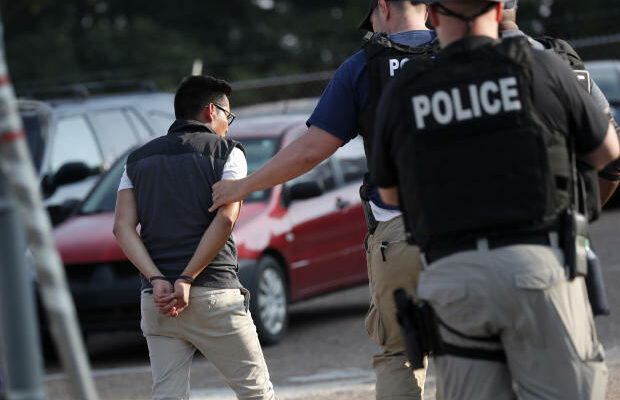 A man is taken into custody at a Koch Foods Inc. plant in Morton, Mississippi, on Wednesday, August 7, 2019.Rogelio V. Solis / AP

“Our worksite enforcement efforts can have a significant impact on the well-being of individuals and the fairness of the labor market,” Mayorkas wrote. “Our accomplishments in this area make clear that we can maximize the impact of our efforts by focusing on unscrupulous employers who exploit the vulnerability of undocumented workers.”

The announcement is a departure from the immigration arrest policies of the Trump administration, which resumed large worksite roundups. In the summer of 2019, Immigration and Customs Enforcement (ICE) carried out the largest single-state immigration enforcement operation in U.S. history, arresting nearly 700 undocumented food processing plant workers in Mississippi.

Tuesday’s memo is also part of the Biden administration’s efforts to narrow who can be detained and deported by ICE. Deportation agents have already been directed to refrain from arresting pregnant or nursing women, victims of serious crimes and undocumented immigrants who don’t have serious criminal records.

In his memo, Mayorkas instructed top DHS officials to avoid placing undocumented victims of labor exploitation in deportation proceedings and to consider granting them temporary legal status. Such actions, Mayorkas argued, will encourage them to cooperate with federal law enforcement.

Mayorkas also charged the department with making sure that E-Verify, an online government program that allows employers to check the status of would-be employees, is not “misused” to retaliate against workers who report workplace abuse.

By targeting employers, Mayorkas said the policy shift could usher in a fairer labor market and benefit businesses competing with employers that are exploiting immigrant workers, including by paying them less.

The discontinuation of mass workplace immigration sweeps was welcomed by advocates for immigrants, who have criticized the Biden administration for not imposing further limits on ICE arrests and deportations.

The new policy, however, is likely to garner condemnation from congressional Republicans, who have linked the limits on immigration arrests in the interior of the country with the sharp increase in migrant interdictions along the U.S.-Mexico border.

Under the latest guidelines, migrants who arrived at the U.S.-Mexico border after November 2020 are a priority for arrest and deportation. Some border-crossers are also being rapidly expelled to Mexico under a Trump-era pandemic measure known as Title 42.