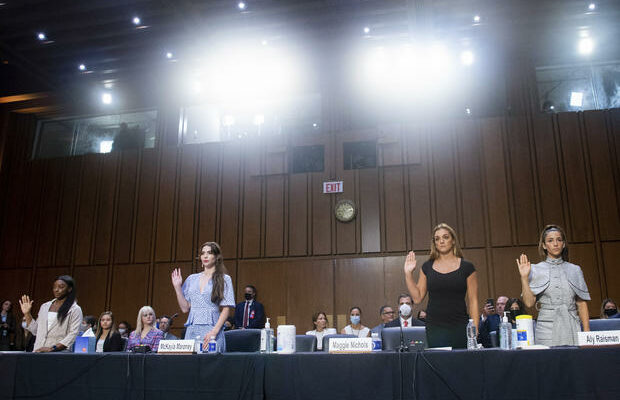 Washington — The nation’s most celebrated and decorated gymnasts offered harrowing testimony before senators on Wednesday about the sexual abuse they suffered by former USA Gymnastics doctor Larry Nassar, arguing the failure of institutions like the FBI to immediately investigate allegations of abuse allowed his misconduct to continue unanswered while the number of his victims grew.

Simone Biles, McKayla Maroney, Maggie Nichols and Aly Raisman appeared before the Senate Judiciary Committee as part of a two-part hearing on the FBI’s mishandling of the investigation into Nassar, who was found to have sexually abused scores of young athletes while working at Michigan State University and with USA Gymnastics. Nichols was the first victim of Nassar’s to report his abuse to USA Gymnastics.

“What is the point of reporting abuse if our own FBI agents are going to take it upon themselves to bury that report in a drawer?” Maroney told the panel. “They had legal, legitimate evidence of child abuse, and did nothing.”

Maroney recalled speaking with the FBI in the summer of 2015 and providing “extreme detail” about Nassar’s abuse during a nearly three-hour phone interview. But the bureau failed to proceed with an investigation into his alleged misconduct until more than a year later, as revealed by the Justice Department’s inspector general in July.

Maroney said her interview with the bureau was not documented until 17 months later, and she accused the FBI of making “entirely false claims” about what she told them.

“They chose to lie about what I said and protect a serial child molester rather than protect not only me but countless others,” she said, arguing the bureau, USA Gymnastics and the U.S. Olympic Committee worked together to conceal the allegations against Nassar.

Wednesday’s hearing comes after the Justice Department’s inspector general concluded in a damning report this summer that FBI employees botched the investigation into allegations of sexual abuse of gymnasts by Nassar in 2015 and 2016.

The inspector general found the FBI’s Indianapolis field office learned of the allegations against Nassar in July 2015, after USA Gymnastics conducted its own internal investigation into accusations of sexual assault. But the bureau did not proceed with an investigation until October 2016, after the Indianapolis Star published a blockbuster story detailing sexual assault allegations against Nassar by former gymnasts, and the Michigan State University Policy Department investigated complaints against him.

Nassar worked as a doctor at the university, treating patients there from 1996 through 2016.

Between July 2015, when USA Gymnastics reported the allegations to the FBI’s Indianapolis office, and September 2016, when the accusations were publicly reported, at least 70 young athletes were abused by Nassar, according to the report.

The inspector general also found that the agent in charge of the Indianapolis office, W. Jay Abbott, spoke with former USA Gymnastics President Stephen Penny about a potential job opportunity with the U.S. Olympic Committee while continuing to participate in bureau discussions regarding the Nassar investigation.

In addition to the Indianapolis field office’s “most basic failures in its law enforcement responsibilities,” the watchdog found the bureau neglected to notify state and local authorities of the allegations against Nassar, and failed to document an interview with one of Nassar’s accusers, among other issues.

Ahead of the hearing, the FBI fired an agent who failed to investigate the allegations against Nassar. Nassar was arrested in November 2016 and faced numerous state and federal charges. He was sentenced to more than 100 years in prison for crimes of sexual abuse and child pornography.

During their testimony on Wednesday, several of the gymnasts held back tears as they recounted Nassar’s sexual abuse, including Biles, who, after detailing her unmatched success as a gymnast, stated, “I am also a survivor of sexual assault.”

“I believe without a doubt that the circumstances that led to my abuse and allowed it to continue are directly the result of the fact that the organizations created by Congress to oversee and protect me as an athlete, USA Gymnastics and the United States Olympic and Paralympic Committees failed to do their jobs,” she said.

Young gymnasts, Biles said, “have been failed, and we deserve answers.”

“To be clear, I blame Larry Nassar and I also blame an entire system that enabled and perpetrated his abuse,” she said, growing emotional.

Biles competed in this summer’s Olympic Games in Tokyo and said she was the only member of Team USA who was a victim of Nassar’s abuse.

“The scars of this horrific abuse continue to live with all of us,” she said. “The impacts of this man’s abuse are not ever over or forgotten.”

Like Maroney, Raisman recalled her experiences with the FBI, telling senators she made “many requests” to speak with the bureau about Nassar’s misconduct, but said it took 14 months for the bureau to contact her.

“It has become painfully clear how a survivor’s healing is affected by the handling of their abuse and it disgusts me that we are still fighting for the most basic answers and accountability over six years later,” she told the committee, taking a deep breath before making her opening remarks.

Raisman said that in 2015, officials knew that at least six gymnasts had been abused by Nassar, but he was allowed to continue working at Michigan State University and Twistars USA Gymnastics Club.

“It was like serving innocent children up to a pedophile on a silver platter,” she said.

Following the testimony from the gymnasts, FBI Director Christopher Wray and Justice Department Inspector General were set to answer questions from the Judiciary panel.

“The FBI’s handling of the Nassar case is a stain on the bureau,” Senator Dick Durbin, a Democrat from Illinois who chairs the committee, said.