U.S. House calls for Russia to free Texan who’s been imprisoned since 2019 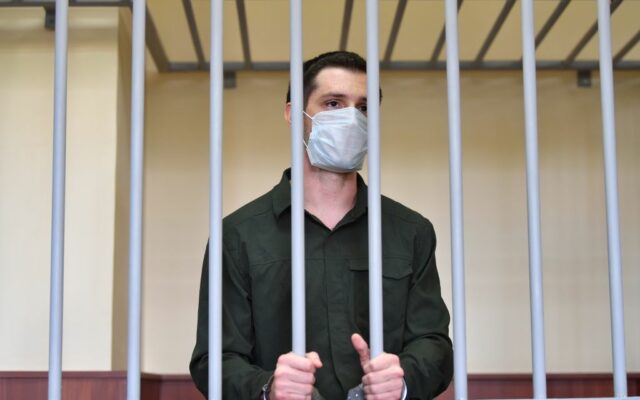 US ex-marine Trevor Reed, charged with attacking police, stands inside a defendants' cage during his verdict hearing at Moscow's Golovinsky district court on July 30, 2020. (Photo by Dimitar DILKOFF / AFP) (Photo by DIMITAR DILKOFF/AFP via Getty Images)

By Abby Livingston, The Texas Tribune

WASHINGTON – The U.S. House overwhelmingly passed a resolution on Tuesday calling for the release of a Texan who’s been imprisoned in Russia for nearly two years.

The resolution, spearheaded by freshman U.S. Rep. August Pfluger, called on Russia to release Trevor Reed, a 29-year-old resident of Granbury. Reed was arrested in August 2019 on specious grounds, according to news reports and American diplomats, and his supporters say he’s being held on trumped-up charges because he’s a former Marine.

“Our message is simple: The United States will not tolerate an American citizen being held by the Putin regime as a political pawn,” Pfluger said Monday afternoon on the House floor. “I urge all of my colleagues to join together and stand firm with Trevor and his family to reunite him with his family and to bring him home. Free Trevor Reed.”

Almost since his swearing in, Pfluger, a Midland Republican, has sought to bring attention to his constituent’s plight. In his floor remarks, he called Reed’s Russian trial both “a sham” and “a kangaroo court.”

“Trevor was initially detained for public intoxication, but when the Russian Federal Security Service discovered that he was a U.S. Marine, they upped the charges and accused him of endangering the lives of police officers,” he said. “The accusation, and the lack of evidence to support it, was so ridiculous that even the Russian judge erupted in laughter during his trial.”

Reed traveled to Russia in the summer of 2019 with his Russian girlfriend and an interest in learning the language. In August, he drank to excess and ultimately Russian police took him to a jail to sober up.

Upon Russian officials discovering Reed was a former Marine, the police officers leveled charges of assault against Reed. He has since been sentenced to nine years in prison.

Joey Reed, Trevor Reed’s father, told The Texas Tribune on Monday that the House’s action “will show a united, bipartisan support for Trevor being released.”

“We think that would send a helpful signal to the Russian government and also help the administration … in any negotiations that might be ongoing,” he added.

Reed’s mother, Paula Reed, said the vote was also a morale boost for her son: “It’s important to Trevor to know he has the backing of his country.”

Russian police reportedly said Reed grabbed the arm of a police officer on his ride to a station, causing the car to swerve and endangering the police. Officers supplied no corroborating evidence, and eyewitnesses dispute this account. Reed’s advocates say there is no video surveillance that shows a swerving police car.

“Trevor’s … wanting Americans to know he’s not guilty,” Joey Reed said. “He wouldn’t do anything like that, and he would never try to harm police officers and he didn’t in this case, and there’s plenty of video evidence and witnesses and Russian government officials to support his defense.”

U.S. Rep. Michael McCaul, an Austinite and the highest ranking Republican on the House Foreign Affairs Committee, has frequently joined Pfluger in this advocacy. McCaul and 22 other Texas members from both parties signed on as cosponsors to Pfluger’s resolution.

In addition to calling on Russia to release Reed, the legislation issued several other demands including condemning “the practice of politically motivated imprisonment,” and they insisted on Reed’s human rights.

Just a day before the House vote, a Russian court denied a Reed appeal.

President Joe Biden has joined the effort. During his meeting with Russian President Vladimir Putin in Geneva last week, Biden said the imprisonment of Reed and another American, Paul Whelan, were discussed.

“We’re going to follow through with that discussion,” he added. “I am not going to walk away on that issue.”

“We were very grateful and hopeful after we heard that,” she said.

This article originally appeared in The Texas Tribune at https://www.texastribune.org/2021/06/29/trevor-reed-august-pfluger/.