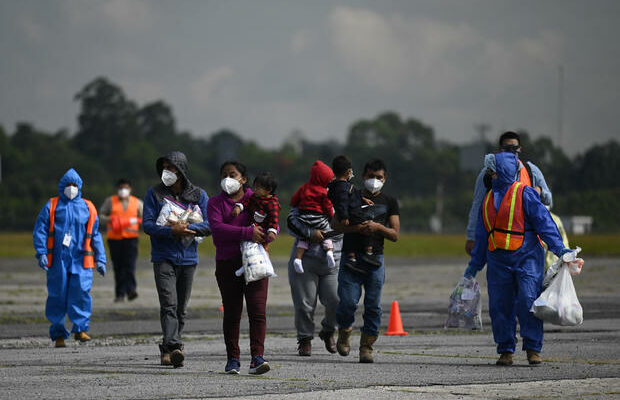 Guatemalan migrants deported from the United States walk upon their arrival at the Air Force Base in Guatemala City on August 4, 2021. JOHAN ORDONEZ/AFP via Getty Images
The Biden administration is ramping up deportations and prosecutions of migrants crossing the southern border illegally amid a 21-year high in migrant arrests and concerns about the rapid spread of the coronavirus Delta variant.
U.S. authorities are now flying Central American migrants deep into the Mexican interior using a Trump-era public health order that was extended indefinitely last week, according to Department of Homeland Security (DHS) officials, who said the expulsions are meant to curb repeat border crossings and the spread of the coronavirus.

The Biden administration has also restarted “expedited removal” flights for some migrant families who can’t be expelled to Mexico under the public health authority, known as Title 42. Since the end of July, the U.S. has carried out six expedited removal flights to Central America, deporting 242 migrant parents and children under the procedure, DHS officials said.

Migrant adults who try to cross the southern border again after being deported could be referred for criminal prosecution under another initiative designed to reduce the high recidivism rate among border-crossers, particularly Mexican men, Customs and Border Protection (CBP) official Manuel Padilla said Friday during a call with Latin American journalists.

“What we want to discourage is irregular migration,” Padilla said in Spanish.

The enforcement efforts mark a new, more stringent chapter in the Biden administration’s border policy, which had previously focused on expanding asylum capacity, ending Trump-era restrictions and expediting the processing of unaccompanied children. The overall objective, the administration has said, is to establish a “humane” and “orderly” process.

“We will always be a nation of borders, and we will enforce our immigration laws in a way that is fair and just,” the White House said in a border policy blueprint released last month.

But a spike in border apprehensions, overcrowding inside Border Patrol facilities operating under limited capacity and growing concerns about rising coronavirus infections have prompted the administration to retool its approach and employ measures that have been historically used to deter migration.

U.S. agents along the border with Mexico likely made 210,000 migrant apprehensions in July, a monthly total not seen since 2000, according to preliminary figures. About 80,000 parents and children traveling as families and 19,000 unaccompanied minors, an all-time high, were among those taken into U.S. border custody last month.

“The numbers continue to be high and are not following the seasonal pattern,” Doris Meissner, a senior fellow at the Migration Policy Institute, told CBS News, referring to border apprehensions increasing during the hot summer months. “The administration, setting aside the politics of it, has an incredible operational challenge in dealing with these numbers.”

“Since taking office, the Administration has needed to rebuild the previously decimated system to provide for the safe, orderly, and humane management of the border,” the department said. “As part of these efforts, the Department of Homeland Security continues to take steps to improve processing at ports of entry and strengthen the U.S. asylum system.”

While unaccompanied children are the only group the Biden administration has categorically exempted from the Title 42 border expulsions, most migrant families encountered along the southern border in the past couple of months have been allowed to seek asylum and temporarily stay in the U.S.

U.S. officials have said their attempts to expel families to Mexico have been hindered by Mexico’s reluctance to accept certain nationalities and parents traveling with young children.

Migrant families processed under Title 42 are generally not allowed to seek U.S. asylum before being expelled to Mexico. Those placed in expedited removal proceedings can be swiftly deported unless they pass interviews with U.S. asylum officers after expressing fear of being harmed in their home countries.

The recent indefinite extension of the Title 42 expulsions policy and the expedited deportations of families have angered advocates for asylum-seekers, who worry the Biden administration is embracing a more draconian border enforcement posture.

Talks between the Biden administration and the American Civil Liberties Union (ACLU) over the fate of the Title 42 border edict collapsed last week after the government decided to continue the expulsions. The administration has also discontinued a partnership with the ACLU that allowed at-risk asylum-seekers to enter the U.S. under humanitarian exemptions to the Title 42 rule.

Lee Gelernt, the lead ACLU attorney challenging the expulsions, visited the Mexican border cities of Matamoros and Reynosa last week to witness the living conditions of asylum-seekers hoping to enter the U.S. He said the decision to shutter the Title 42 exemption process for vulnerable asylum-seekers will place families in “immediate danger.”

“Families with small children are living in horrendous conditions in outdoor migrant camps and are sitting ducks for the cartels,” Gelernt told CBS News.