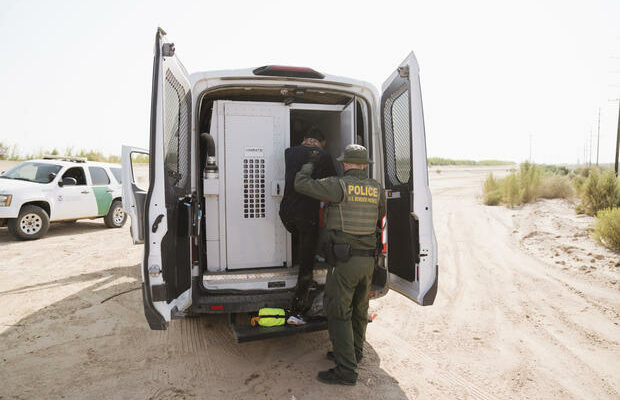 The U.S. government recorded more than 1.7 million interdictions of migrants along the southern border during the past 12 months, the highest figure of any fiscal year in history, according to Department of Homeland Security data released Friday.

A massive increase in migration to the U.S.-Mexico border that peaked during the hot summer months led to a record-setting number of migrant apprehensions in fiscal year 2021, which ended in September.

Roughly 61% of the migrants encountered during the past 12 months were quickly expelled to Mexico or their homeland under a pandemic-era emergency policy known as Title 42, which U.S. border officials used to carry out more than 1 million expulsions during the past fiscal year.

The mass expulsion policy, which the Trump administration enacted in March 2020 on public health grounds, has fueled a higher-than-usual rate of repeat border crossings, as some migrants have tried to enter the U.S. unlawfully more than once after being expelled. In September, for example, 26% of migrants interdicted had been previously taken into U.S. custody, Customs and Border Protection said.

“The large number of expulsions during the pandemic has contributed to a larger-than-usual number of migrants making multiple border crossing attempts, which means that total encounters somewhat overstate the number of unique individuals arriving at the border,” the agency said in a statement Friday.

In fiscal year 2021, 671,000 migrants and asylum-seekers were processed under immigration laws and placed in deportation proceedings, which can be halted if judges find they are fleeing persecution or torture.

Those processed under U.S. immigration law can be rapidly deported under a process known as “expedited removal,” sent to long-term Immigration and Customs Enforcement detention centers or released with a notice to appear before an immigration judge.

Arrests of adults traveling without children formed the largest migrant demographic group, making up more than 1.1 million — or 64% — of all interdictions by border agents in fiscal year 2021. Nearly 600,000 of those adults were from Mexico.

“Single adults had declined as an overall percentage of encounters in the last few years and it is now up to a majority. Single adults tend to drive recidivism,” said Theresa Cardinal Brown, a Bipartisan Policy Center analyst who worked on border issues for the Bush and Obama administrations. “That’s the pattern that we saw the last time the numbers were this high. It was mostly single adults; they were coming back repeatedly.”

Nearly 480,000 migrant parents and children entered U.S. custody as families, the second-largest tally of any fiscal year. Approximately 57% of families hailed from Guatemala, Honduras and El Salvador, which are collectively known as Central America’s Northern Triangle.

In fiscal year 2021, U.S. officials encountered a record 145,000 unaccompanied migrant children, the vast majority of them from Central America. The Biden administration exempted unaccompanied minors from the Title 42 expulsions and has been transferring most to government shelters, as mandated by a 2008 anti-trafficking law.

The previous record was set in fiscal year 1986, when Border Patrol reported making over 1,643,000 migrant arrests, according to historical data. These figures do not include migrants who evaded capture after crossing the border unlawfully.

This year’s extraordinary migration wave has posed dire logistical, humanitarian and political challenges for President Biden during the first months of his administration, which promised to usher in an “orderly” and “humane” border policy.

The incredibly high number of border arrests, coupled with inconsistent policies, has generated strong criticism from conservatives and progressives alike.

Republican lawmakers have accused the Biden administration of sparking the sharp increase in migrant interdictions through what they see as lax border enforcement efforts, while progressive advocates have been increasingly critical of the administration for maintaining some Trump-era policies like Title 42.

Like the Trump administration, the Biden administration has said the Title 42 expulsions are needed to prevent overcrowding and the spread of the coronavirus inside migrant holding facilities.

The administration also announced earlier this month that it will be ready in mid-November to implement the court-mandated revival of a controversial Trump-era program that requires migrants to wait in Mexico while their asylum cases are adjudicated by U.S. courts.

The planned reinstatement of the Remain-in-Mexico policy has further strained the relationship between the Biden administration and progressive advocates, who “walked out” of meeting with top U.S. officials last week to protest the policy’s potential revival, which the Mexican government still needs to green light.

About 78% of border interdictions in fiscal year 2021 were of migrants from Mexico and Central America’s Northern Triangle. More than 370,000 migrants hailed from dozens of other countries, including Ecuador, Brazil, Haiti, Cuba, Nicaragua and Venezuela, the government data show.