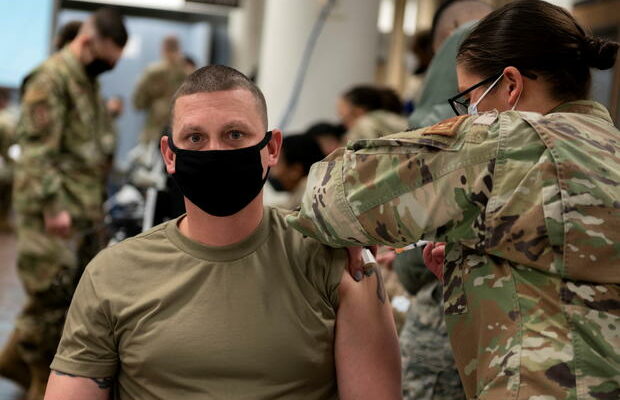 ▶ Watch Video: How to address Americans’ concerns about the COVID-19 vaccines
The United States military began a coronavirus vaccination campaign for personnel stationed in South Korea Tuesday as a third virus wave saw the host country record its highest daily death toll since the pandemic began. US Forces Korea (USFK) administered initial doses of the Moderna vaccine for military and civilian healthcare workers, first responders and command staff across its medical treatment facilities in the country, it said in a statement.

Washington has around 28,500 troops stationed in South Korea to help it defend against the nuclear-armed North and protect U.S. interests in northeast Asia.

Among the inoculated was USFK Commander Robert Abrams, who was pictured receiving the shot in a mask and a T-shirt emblazoned with “#KilltheVirus”.

The vaccination is voluntary but the USFK chief “strongly” encouraged American service members to receive it. “I want you to make an informed decision for you and your family regarding the vaccine,” he said in the statement.

South Korea is one of the four overseas locations to receive the Moderna vaccine, which won emergency use authorization from the U.S. Food and Drug Administration on December 18.

The inoculations came as the new wave of the virus gripped the Asian country. The resurgence was centered on the greater Seoul area, which has seen daily cases climb to over 1,000 several times this month despite stricter measures.

The country reported 1,046 new cases and 40 deaths Tuesday, its highest daily toll since it first identified an infection in January. It has reported a total of 58,725 coronavirus cases.

South Korean President Moon Jae-in and Moderna CEO Stephane Bancel held a video call late Monday and agreed that the company will supply vaccine doses for 20 million South Koreans in the second quarter of 2021, according to Moon’s office.

If the Moderna agreement is formally signed, South Korea will have enough vaccines for 56 million people, or four million more than its total population, Moon’s office said.

It plans to launch its domestic vaccination program in February.

South Korea has been praised as a model of how to combat the virus, with the public largely following official guidelines and authorities preventing a wider outbreak with an intensive “trace, test and treat” approach.

More about:
Coronavirus
US Military
Vaccinations